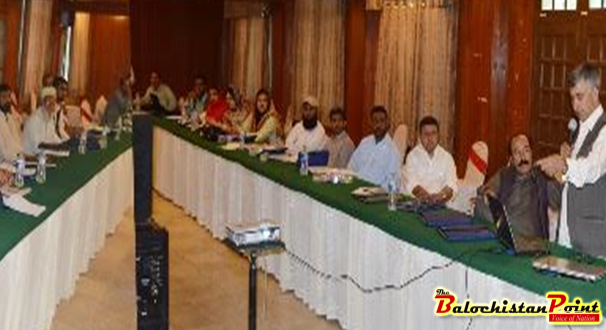 Provincial Malaria Control Program coordinator Dr. Kamalan Gichki said that Leishmaniasis has been considered to be a serious public health problem in many countries of the world and is responsible for adverse economic and social impact. The disease is documented to be currently prevalent in 88 countries around the world, 72 on which are developing countries, but in Pakistan more specifically in Balochistan its ratio is very high.

He was expressing these views while briefing the participants of two day consultative awareness seminar on them of “Action Plan for Cutaneous Leishmaniasis Treatment in Balochistan”. The program   was conducted by the Provincial Health Department Malaria Control Program and UN- World Health Organization.

“The provincial government with the support of WHO and other stakeholders is utilizing all its resources to curb the rate of prevalence in an endemic situation and in near future all the vertical bound diseases will be included in the paradigm of provincial malaria control program that includes Chickengunea, Congo, Dengue and  Leishmaniasis.

Dr. Dawood Riaz Baloch said: “Leishmaniasis is a group of parasitic diseases caused by morphologically similar parasites in the genus Leishmania and transmitted by the bite of Phlebotomine sand-flies. To date some 21 species of Leishmania are known to be pathogenic to humans.”  Adding more he said the most dangerous and severe visceral form with domestic or wildlife animals being the main source of infection. After the continuous outbreaks in southern areas of province Balochistan, Leishmaniasis has set prevalence to the affected region throughout the year. Out of 32 districts, 15 districts have been continuously reporting Leishmaniasis cases even in hundreds in past five years the data shows in district Quetta a total of 2899 cases has been reported alike others in Killa Saifullah 2132 cases reported, in Sibi 1179, Lasbela 998, Khuzdar 685, Nasirabad 391, Jhal Magsi 373, Kech268, Gwadar 243, Panjgur 208 Jaffarabad 158, Pishin118, Awaran107, Kalat 116 and in Bolan 68 cases were reported.

Adding more he said in response to the reported cases of Leishmaniasis, World Health Organization through its program DEWS used to cater the affected community by providing   on-time and regular treatment for which DHQ hospital were set as temporary treatment centers in endemic districts. These temporary treatment centers were only functionalize when injections were supplied there after obtaining a proper record (line list) of the treated cases. After the closure of DEWS program, treatment had suffered as neither WHO nor Health Department Government of Balochistan could re-functionalize these centers through purchase & place of relevant medicines till date. Since there is no registered medicine company for the production of Glucantine injections, Government of Balochistan is wholly depending upon WHO for the availability of medicines, however community is getting treatment on its own by utilizing similar formula product being sold in black market on high price.

On the provincial side Dr. Kamalan PC of Malaria Control Program said: “PC-I is underway and expectedly a time taking process for approval. Meanwhile WHO in order to respond reported cases of Leishmaniasis, is providing 8000 injections of Glucantime (treatment for Leishmaniasis) to the province Balochistan for utilization till product expiry i.e. Oct-2017. The Govt of Balochistan therefore intends to place a short time action plan for proper utilization of given supplies as well as streamlining Cutaneous Leishmaniasis response mechanism till the approval of PC-I for VBD control program.”

Other key trainers briefed the participants about the vertical borne disease, its prevention measures and adoptive steps. They also urged the participants to provide maximum outreach to the general public through public awareness.

Published in The Balochistan Point on May 8, 2017