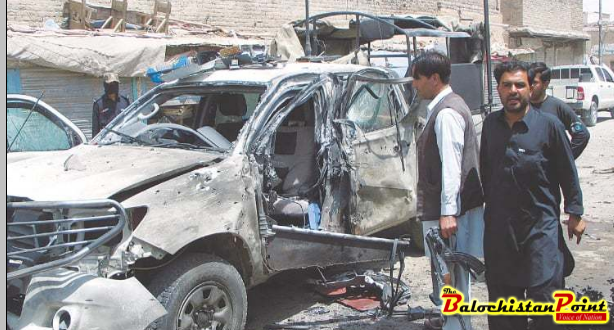 QUETTA: District Police Officer (DPO) of Qila Abdullah was killed and 10 others injured in a suicide attack in Chaman on Monday forenoon.

According to the details Chaman DPO SSP Sajid Khan Mohmand was attacked when his convey was passing through Boghara Road area of Chaman on the border with Afghanistan.

Balochistan Government Spokesperson Anwarul Haq Kakar told, “The senior police official was martyred and at least 10 other people, including two police officials, were injured in a blast near Boghra Road”

SSP Mohmand was serving as the district police officer of Qilla Abdullah.

At least 10 people were also injured when a bike-riding suicide bomber targeted the convoy of the senior police officer, local media reported.

Two policemen also received serious injuries those were identified as Muhammad Shafiq and Mohammad Yonus. Both are said to be in serious condition in the hospital.

Security forces rushed to the site soon after the blast and shifted victims of the suicide bombing to the hospital. The injured include five police personnel who were traveling with the district police chief as his escort.

2017-07-11
admin
Previous: Ghulam Husain Showaz, as a Modern Classist
Next: Oxfam Signs MoU to Improve the Lives of Rice Growers in Pakistan