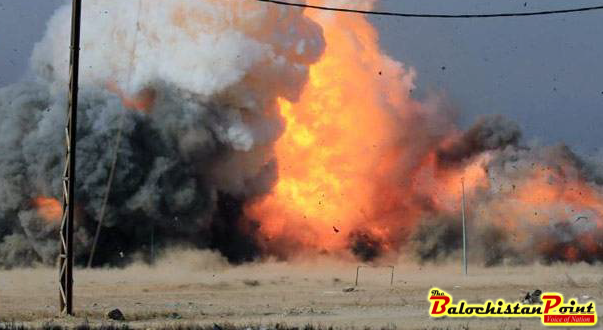 The ‘Mother of All Bombs’ Goes to Afghanistan

These are the times where magnitude and size matters. Bombs in number with much heft and presence are being sought to root out those non-state jihadists of the Prophet, destructively maiming and killing all before them in the name of the next heavily drawn out cause.

On Friday, United States armed forces busied themselves with dropping such a weapon of truly lethal size against a country that has had more bombs directed at it than worthy industrial incentives in half a century.

It seemed to rival the announcement of a birth, and it was, in fact, sanctified as the “Mother of All Bombs” known less romantically as the GBU-43 Massive Ordnance Air Blast. (The only other conventional weapon of greater scale is the physically suggestive Massive Ordnance Penetrator, coming in at a busting 30,000 pounds.)

The use of this particular weapon was tediously familiar, reminding villagers on the ground in Nangarhar in eastern Afghanistan how their country has become fun and fodder for US air strikes since Trump came to power.

The new president, in turn, has built on the murderous momentum ushered in by the outgoing Obama presidency, which stepped up airstrikes in dramatic fashion with the departure of the majority of coalition troops two years ago. Afghanistan remains a vacuum repeatedly filled by failed missions and violent urges.

Bombs of enormous power, short of the nuclear variety, were deployed against an elusive Osama bin Laden in the aftermath of the invasion of Afghanistan in 2001. The issue then, as now, was his use of labyrinthine tunnel complexes. The weapons of choice then were 15,000 pound “daisy cutters” with a supposedly adept pulverising capability.

In the lead-up to the invasion of Iraq in 2003, the Air Force Research Laboratory wished to add more punch to such weapons, designing a MOAB, ostensibly as a deterrent against the soon-to-be-deposed Saddam Hussein.

The 21,600 pound beast was used against a complex of tunnels supposedly designed by Islamic State, killing 36 militants. A subsequent report from Afghan authorities raised that number to almost a hundred, though their US counterparts were staying mum.

“The United States takes the fight against ISIS very seriously,” claimed the historically challenged White House Press Secretary Sean Spicer, “and in order to defeat the group we must deny them operational space, which we did.”

General John W. Nicholson, US commander in Afghanistan, referenced the desperate tactics of the ISIS group as a justification for the weapon. “As ISIS-K’s losses have mounted, they are using IEDs, bunkers and tunnels to thicken their defence.” He further explained that, “This is the right munition to reduce these obstacles and maintain the momentum of our offensive against ISIS-K.”

In the meantime, WikiLeaks insisted on a dark irony to the whole story: those very same tunnels now being pulverised by mother bombs and what not were actually funded with resources from the Central Intelligence Agency.

WikiLeaks was hardly being controversial in mentioning it, citing a report from the New York Times by Mary Anne Weaver noting how the Tora Bora tunnel complex was envisaged and constructed during the war against the Soviet Union. “It’s miles of tunnels, bunkers and base camps, dug deeply into the steep rock walls, had been part of a CIA-financed complex built for the mujahedeen.”

There was a repeated sense that this entire episode was one for show, the usual bullyboy psychology power tends to encourage. For one, would the North Koreans take note of this phallocentric display of might? The regime in Pyongyang has been more erratic, and theatrical, of late, keeping up with the Trump administration’s own sense of thespian bluster.

Using such a weapon also carried various risks, not least of all the prospect of obliterating villagers in proximity of the oxygen hungry blast. In the optimistic and unconvincing overview given by Dawlat Waziri, Afghan ministry spokesman, the bomb had avoided causing mayhem to the civilian population. “No civilian has been hurt and only the base, which Daesh use to launch attacks in other parts of the province, was destroyed.”

Where such a monstrosity fits into the legitimate canons of international law is hard to see. At worst, it has been destructive to sovereignty and the restrained use of force. “Through its use of blunt military force on non-state actors in South and West Asia,” Arun Mohan Sukumar solemnly notes, “the US had systematically weakened the restraints that the United Nations imposes on all countries, big and small.”

Blanket justifications for such actions keep pivoting on UN Security Council Resolution 1373, deeming terrorism to be a “threat against international peace and security,” granting states the authority to target terrorism “by all means.” An unfortunate and unguarded choice of words.

The actual impact of the weapon in terms of overall strategy is also shrouded in vague Pentagon speak and speculation, the sort typical in this long, misnamed period called the “War on Terror.” It was, according to one spokesman, merely “projected…that the bomb has the ability to collapse the tunnels” upon combatants operating within them. Assessments would have to follow, and these would not necessarily be conclusive.

What a wonderful sense of purpose for this Easter: a massacre, another sovereign violation and an entire compromise of values in the name of military bravado. All of this merely adds to the fact that Afghanistan has become a military test site for the United States, one where belligerent big boys may test their murderous toys with minimal restraint.

Published in The Balochistan Point on April 18, 2017