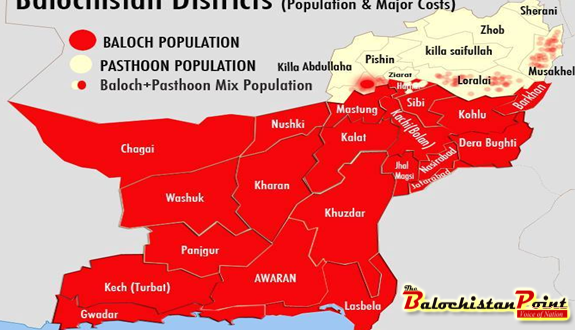 Balochistan remained a homeland of Pashtuns and Balochs for a long period of time. Pashtuns and Balochs fought many war together to defeat any rivals seemed treacherous to their homeland. After the “Kalat treaty” both tribes developed a more concise and beneficial relationship that played a vital role in enhancing their social economic and political history.

Unfortunately the imperialist incursion in the region and most importantly the “The treaty of Gandamak” that was signed after the defeat of second Anglo-afghan war, marked coercive lines on the land and divided many regions of the old days Afghanistan and present day Pakistan, meanwhile it also effected the territories of the both tribes. Same after the partition of Pakistan the political wings of both tribes stood together against the one unit and asked for provincial rights and autonomy.

But differences took place when the administrative policies kept Pashtun in the Balochistan province and also by separating the integral parts of province abruptly by putting the Baloch areas like Dera Ghazi khan and Rajanpur into Punjab and Jacobabad into Sindh.

Although Pashtuns have a long historical background and adequate understanding with Balochs and were fully fine to live together but the new political dynamics with uncertainty has not pushed the region in severe crises but also gave reason to ethnic conflict and hatred.

On the other hands, the Nationalist parties of the both ethnic groups have no any clear political ideology but inoperable slogans that are based on the enmity with each other. Same is the case with religious parties who are also unable to construct any line between the right and wrong of the province and are busy in pulling the legs of eachparty, and are in aconstant effort to exploit people in number of ways rather to facilitate them.

The politics of the Nationalist parties of Balochistan evolve around the exploitation of feelings of the each ethnicity against the other which has intimidating sways on the society.

Nationalists are trying to make the people afraid by propagating that their land and resources will be seized by the opposite ethnicity. Which is totally gibberish and prattle. As both ethnicities have their distinguished identities and demarcated territories. So creating the sense that one will grab the resources of other ethnicity is just an attempt to make the people fool, extend the vote bank and most importantly to divert people’s attention for the actual crises.

The writer is student of BS Sociology University of Gujrat

Published in The Balochistan Point on September 29, 2016