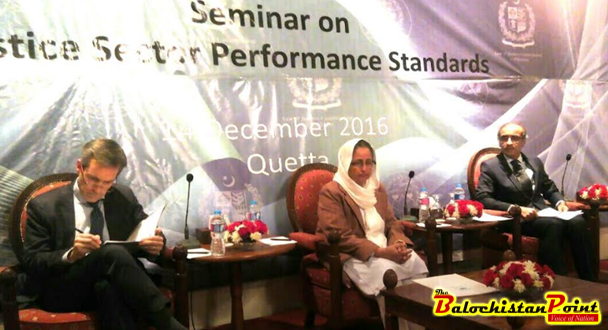 There must be an impartial, fair and accessible judicial system, Says Justice Syeda Tahira Safdar

Quetta: Balochistan High Court Senior Judge Justice Syeda Tahira Safdar has said that there must be an impartial, fair and accessible judicial system, to deliver safety and security to life, religion, property, family and reputation, with respect for liberty, equality before the law, and access to justice for all.

On the occasion Chief Guest Senior judge of the Balochistan High Court Justice Syeda Tahira Safdar said: “For improving the judicial system coordination and collaboration amongst the various sectors is required.”

She said that in order to achieve the desired outcome the Judiciary, Police, Prosecution, prisons officials, ministries and concerned authorities have to select the correct competent, human resource and there would not be political undue influence on the policy making specifically to the Justice and law system.

In addition she further elaborated that corruption was rampant in society adding that it not only included bribery but also extortion, nepotism, patronage, graft and embezzlement.

“Our focus should be on how to eliminate the corruption specifically in judicial system, and in its integral parts. She urged the working groups and the relevant stakeholders that to develop smooth communication and better working relationships as successful rule of law is based on institutional development.” She said.

She appreciated the efforts of the provincial judicial committee and BHC for conducting pragmatic brain storming event that will be very beneficial for the Judiciary in general and the relevant departments is particular.

Special guest speaker from Canada, Munk School of Global Affairs University of Toronto ‘Professor Todd Foglesong’ gave speech to the participants and said that in judicial system the set parameters for measuring the overall quality had no values.
He said, “Policies shall be made that on what causes the delay in justice is prevailing and how to reduce these delays in the prosecutions till the convictions; a cogent effort is the need of time. Developing the capacities of the law officers and bridging the gap by introduction of technology based solutions.”

He further elaborated that cultural, moral values are more superior to the systematic approaches, individualism and self-reliance concepts shall be promoted

Secretary Law and Justice Commission of Pakistan Mr. Sarwar Khan said that Provincial Justice Committees are the only apex bodies that are responsible for improving the quality of service delivery as a sector against composite sectoral indicators such as fair convictions. As well as designing, leading, implementing, monitoring and evaluating justice sector performance and reforms.

He further elaborated that in the wake of new steps PJCs have the power to review and implement National Judicial policy 2009adding that for the improvement in the overall judicial system the Law and Justice Commission Pakistan would give it best.

Published in The Balochistan Point on December 15, 2016