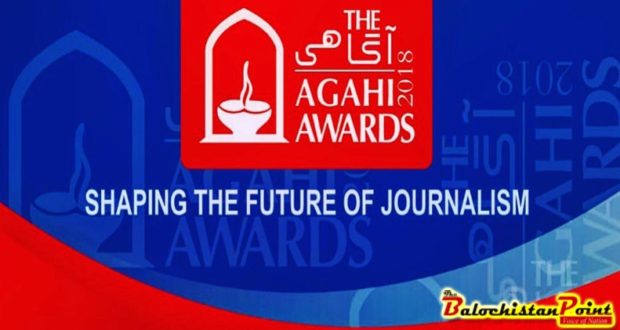 This year AGAHI Awards to celebrate dignity for all

ISLAMABAD: This year’s AGAHl Awards ceremony to be held on the International Anti-Corruption Day December 9, 2018; recognizing the efforts of journalists and the media community. This year AGAHI Awards is celebrating dignity for all.

AGAHI and Mishal in collaboration with multiple stakeholders have jointly nominated national and international leading opinion-makers, development experts, media gurus and knowledge professionals to be part of the judges’ panel to evaluate the entries.

“Dignity for journalists should be ensured for both their professional wellbeing,” said Nida Karim, the Executive Lead for AGAHI Awards. “Journalism is a mirror for the society to reflect on its values and to ensure its prosperity. AGAHI Awards has been the benchmark to measure journalistic professional excellence for the last 6 years.”

AGAHI Awards recognizes the content across various media platforms; be it print, broadcast or digital, promoting socio-cultural values, prosperity and dignity for all. In a world of rapidly changing dynamics especially in the media industry, AGAHI Awards prides itself on recognizing the best journalism practices. Many of the AGAHI Awards winners’ are now in decision-making and leadership positions across the industry for “Shaping the Future of Journalism”, and furthering the cause of Dignity for All.

“Journalists are supposed to work for everyone’s dignity but one cannot even think about the dignity of a journalist today when he is being denied the basic right of economic justice,” said Mazhar Iqbal, President Rawalpindi Islamabad Union of Journalists (Dastoor Group). “Many journalists for months are not even paid their salaries.”

Ethical and quality journalism plays a crucial role in enhancing the collective consciousness of a society that builds a nation’s identity and purpose by promoting free, responsible and democratic utilization of the media. The AGAHI Awards acknowledges journalists’ professional commitment to safeguarding public interest. The objective of AGAHI Awards is to recognize and appreciate the best journalistic practices in Pakistan, creating a healthy competition within the community, encouraging ethical and professional reporting.

Inaugurated on March 28th, 2012, the AGAHI Awards are Pakistan’s first ever journalism awards recognizing the best journalists in more than 40 different journalism thematic areas. Through this initiative, AGAHI and Mishal Pakistan, in collaboration with leading press clubs across the country, local and international media development bodies, academia, regulatory authorities and the private sector, have been playing an instrumental role in promoting content diversity.

The AGAHI Awards are the most sought-after journalism recognition in Pakistan. The Awards have been the foremost development initiative for journalist community in the country. The awards have identified some of the most talented and diligent journalists in the industry.

Mishal Pakistan is the Country Partner Institute of the Future of Economic Progress System Initiative of the World Economic Forum. Established in 2003, Mishal has been engaged with key stakeholders in Pakistan to improve the state of media and competitiveness through multiple good governance initiatives.

AGAHI is a not for profit organization established in 2011 under the Society Registration Act 1860. Its primary function is to create non-paid communication strategies, content intelligence structures, development collaterals and tools for diverse sectors and organizations. AGAHI in association with several leading national and international partners focuses on creating shared spaces for interactive learning, collaborative thinking, and knowledge sharing. It is at the forefront of devising foresight research and future scenarios work in Pakistan.

Published in The Balochistan Point on December 3, 2018

2018-12-03
admin
Previous: It is need of the hour to take every child to school in Balochistan
Next: Business Gala held in Turbt University, Gwadar Campus