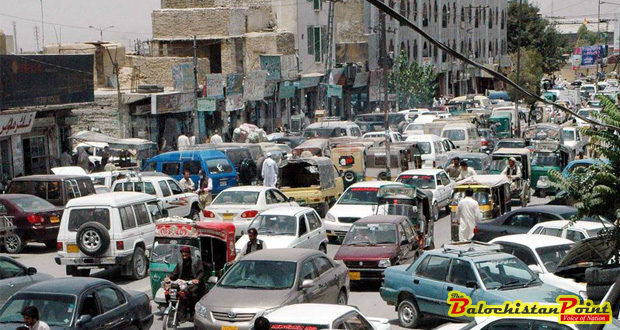 With the increasing population the problem of traffic control has become very acute in almost all the big cities in Balochistan. The increase in traffic has also added to the number of traffic accidents and roads are growing dangerous day by day. Unfortunately, we have little traffic sense and perhaps no respect for the traffic rules.

No doubt, bad roads and high speed driving are the main causes of traffic accidents. Traffic issue in Balochistan is getting worse with every coming day, especially in big cities like Karachi, Lahore, Rawalpindi, Islamabad, Quetta, Peshawar and Hyderabad. Government is doing little efforts to avoid traffic jams and other traffic problems in Balochistan.

The rising number of smoke belching vehicles during the rush hours has left the traffic policemen gasping for a whiff of fresh air. They are badly affected by the evils of air pollution and a majority of them are either suffering from some ear, nose or throat problem or have problems of burning eyes, dizziness, lung infection etc. The high density of vehicles in metros is also responsible for the rise in the number of road accidents.

Traffic jams is another area where people waste hours and if anyone is heading for a hospital in case of an emergency, then the patient can only look up to God for mercy. The area for parking vehicles, in metros especially is constantly shrinking under pressure from the rising number of cars and bikes. People do not have traffic sense where traffic police and media have to educate public.

Our government and traffic police department must make the conditions of roads good. Different timing for starting and closings of offices and schools should be done to avoid rush in the morning, afternoon and evening on roads. If they do so, there will be fewer chances of accidents and traffic will move smoothly in the big cities of Balochistan and people will find themselves easy in driving.

Published in The Balochistan Point on January 15, 2017