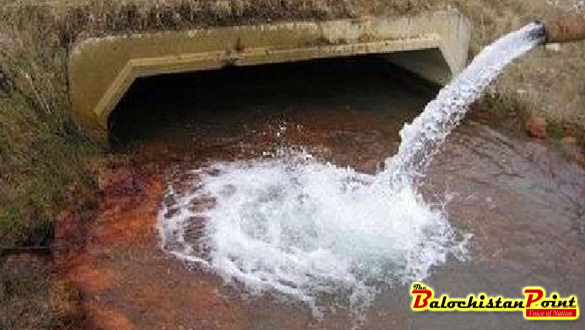 Water pollution is creating major threats to the public health. Pakistan is included among the most dangerous countries where people do not have access to safe water. It ranks at 80th number among 122 countries in the world. Most of the citizens still do not have water to drink. The people are compelled to buy toxic water from tanker mafia, which is causing diarrhea, typhoid, intestinal worms and hepatitis.

It is also estimated that more than 250,000 children die due to water borne diseases each year. As many as 3.5 million children are at high risk and can die at any time because the water we use is full of bacteria and causing deadliest diseases.

Drinking water sources, surface and groundwater are full of toxic metals and pesticides in across the Balochistan.

The people of Balochistan are compelled to drink polluted water. People think that it is better to drink toxic water; otherwise they will die without pure water. Diarrhea, gastroenteritis, typhoid, infection, intestinal worms and infant deaths are caused by waterborne diarrhea in Balochistan. The deadliest diseases are affecting and causing thousands of deaths in Balochistan.

Apart from this, many cities of Balochistan are suffering from shortage of water. The biggest example is Gwadar where the people are compelled to buy water from tankers, not knowing whether from where this water are brought, and are they protected from diseases? This water is full of bacteria and creating health threats to the people of Gwadar. Nearly for two decades, few efforts were made to tame the floods, build water storage facilities or construct dams, small or medium. Still the required number of dams has not been constructed and people are deprived of their basic requirements. Due to this, people have migrated to Sindh, Punjab and other places for sustainable life.

It is estimated that each year more than 250,000 child deaths occurred in Pakistan, but half of the cases are being recorded in Balochistan. Balochistan is the most backward and poor province of Pakistan, and mostly the people belong to rural areas. It was recorded that none of the rural areas of Balochistan is supplying secure water. The water which is being used is toxic. Even some areas of the capital Quetta are facing the same problems.

Undoubtedly, Balochistan is full of natural resources. The saddening matter is that these resources have never been used for the protection of poor people of Balochistan. Mostly the canals water is being used for drinking purpose. Unfortunately, the release of toxic industrial water without treatment in the canals is a great threat for human life. The men, women and children are continuing to be infected from multiple water related diseases and losing their precious life.

A question is raised that where is government who had promised to provide each and every facilities to the citizens? Why they are silent and nothing is being done for the protection of thousands of lives? The water related diseases are killing precious life, but government has left them trouble.