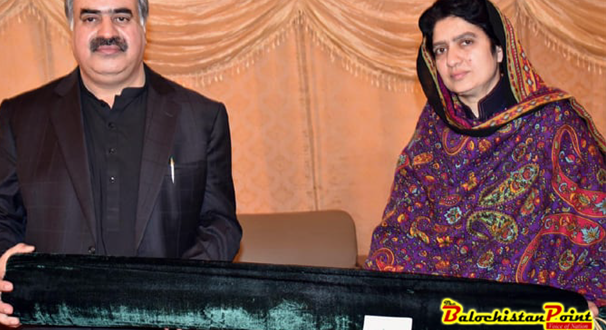 We Will have To Give a Developed and Peaceful Balochistan to the Next Generations: Nawab Sanaullah Zehri

Quetta: We will have to give a developed and peaceful Balochistan to the next generations, said Chief Minister Balochistan, Nawab Sanaullah Zehri while addressing at luncheon hosted in his honor by Speaker Balochistan Assembly, Ms. Raheela Hameed Khan Durrani here on Monday.

Chief Minister Balochistan, Nawab Sanaullah Khan Zehri stressed on the need of peace to achieve development in province.  “I invite everybody to come and become a part of this journey”.He added.

The Chief Minister said that neither the terrorist acts would deter our resolve for development nor anybody would be allowed to kill innocent people or enforce his point of view on masses.

“Political and military leaderships have been enjoying complete harmony in weeding out such elements,” he said.

Chief Minister added that returning of misguided people in the main stream of national politics was not only in the best interest of province and country but also it was in their own interest.

“I once again invite them to come back to serve their own country, play their crucial role in development of province and the country,” he added.

“We want to ensure provision of all basic facilities of life to our people,” he added.

Chief Minister observed: “The distance between Gwadar and Zhob is more than 1300 km while our population is less than 10 million, naturally this goes in our interest as we have small population with abundant of resources.”

Nawab Sanaullah Zehri said that the process of peace and development would continue in the province. He said that the people of Balochistan were enlightened and generous, and we were the custodian of tradition of women respect.

“First time in the history of the country, a woman speaker was elected in Balochistan Assembly,” he pointed out.

Published in The Balochistan Point on March 7,2016

2016-03-08
admin
Previous: Letter: The Challenges of Good Governance
Next: Balochistan Has Stories