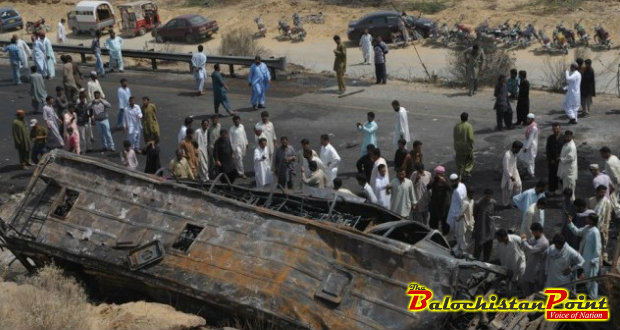 Who’s responsible for the growing number of road accidents in Balochistan?

11 people were killed in a deadly road accident on August 10, near Kalat district in Balochistan. Road accidents consuming lives of more than dozens of passengers is a normal occurrence on the highways of Balochistan. The reason for a rising number of accidents is the poor performance and conduct and control structure of National Highway Authority (NHA) and National Highways and Motorways Police (NHMP) in the province.

According to data provided by the Home department, 240 people lost their lives in major road accidents in the year 2014 alone. Deadliest road accident that year took place on March 22, when 40 people were killed. Increase in highway accident casualties has been ignored due to prevailing law and order situation in the province which has resulted in scores of causalities through other means.

The second reason is the traditional and systematic delay of NHA in constructing highways of Balochistan. Most of the deadly accidents have taken place due to the fact that highways were under construction. Timely completion of highway project is something that NHA in Balochistan is not accustomed to do. The infamous Nawab Aslam Raisani was Chief Minister of Balochistan for five years. During his entire tenure he did his level best to ensure completion of N-25, from Quetta to Kalat, which fall in his constituency. Unfortunately, NHA did not complete a 100 km part of N-25 in five years even when a provincial Chief Minister was constantly pushing for it. To put this into context, state-of-the-art Lahore-Islamabad Motorway was constructed in less than two years. And so, it’s evident that the centralization of Ministry of Communication and federal control of NHA is dearly costing Balochistan.

The third reason is the less than satisfactory performance of National Highways and Motorways Police (NHMP) in Balochistan. NHMP is responsible for regulating traffic on National highways through effective policing. NHMP is responsible for developing mechanisms to ensure compliance with road safety mechanisms. However, NHMP has failed to do its job properly in Balochistan due to its negligible presence. Out of the 3,599 km long national highways of Balochistan, NHMP only regulates 357 km portion of N-25 and 110 km portion of N-10. Balochistan consists of 37.66% national highways of Pakistan and only 16.95% apparatus of NHMP. Not to mention the fact that NHMP is a federal subject and out of the control of Balochistan government.

NHA has disappointed people of Balochistan with its performance. In the Annual Development Program, funds are seldom released for National Highway projects approved for Balochistan. In such a situation, China-Pakistan Economic Corridor was a ray of hope for the state of national highways in Balochistan. Under CPEC, a network of roads would have to be constructed that connects Gwadar port in Balochistan with Kashghar in western China. There was hope that Balochistan would get wider, 4-6 lane, roads stretching from Gwadar to Zhob via Quetta. However, these hopes were shattered the day the Punjab-centric government of PML-N shifted the 6 lane motorway project, under CPEC, to Sindh and Punjab and provided Balochistan with more ‘Grade-II’ two-lane roads. In other words there would be no desirable improvement in national highways of Pakistan even after $46 billion projects of CPEC are completed.

Now, what can be done to improve National Highways in Balochistan? There can be some solutions but they are not easy to implement given the federal control of subject of national highways. Therefore, Balochistan along with other provinces should lobby for decentralization of NHA and NHMP and bring them under provincial control. It would be a bitter pill for swallow for the federal government but that’s the price that needs to be paid to maintain a vibrant and sustainable federation. Once that’s achieved, if ever, then Balochistan government should allocate funds from its own development program for widening national highways in Balochistan. This would not only reduce the road accidents substantially but it would also improve the economic capacity of entire province.

Author is the Editor of Balochistan Point

Republished in The Balochistan Point on August 18, 2015