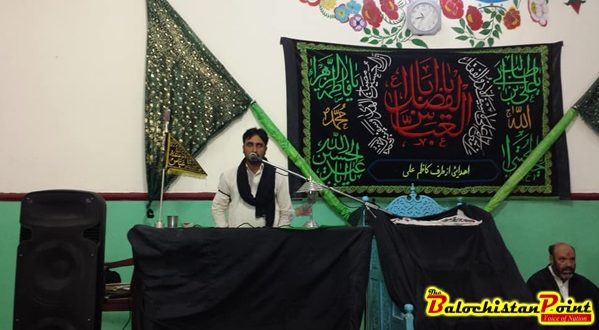 ZHOB: Like elsewhere in Balochistan, Youm-e-Ashura also observed here in Zhob with religious sanctity, zeal and solemnity to pay homage to the supreme sacrifices of Hazrat Imam Hussain and his companions for the supremacy of Islam.

Alam and Zuljinnah processions were taken out from the Imambargah after passing through its traditional route culminated at the same place. Majalis and Sham-e-Ghareeban were also held in the evening in which Shiite scholars narrated significance of the martyrdom of Hazrat Imam Hussain and his companions in Karbala.

Strict security arrangements were taken by the district administration and officials concerned visited the Imambargah to examine the security and other arrangements. Contingents of police were deployed at all the entry and exit points and the adjoining roads were also completely blocked for traffic. The shops near the Imambargah also remained closed. During Muharram apart from deployment of contingent of police at different places, personnel were deployed at the entry and exit points of the city to keep a check on incoming and outgoing people. Moreover, patrolling was also increased on Quetta and D.I Khan highways and on the city roads.

Meanwhile, Tauqeer Hussain Jaffari from the Shiite community has praised the district administration, police, traders and people from all walks of life for their support and cooperation in ensuring peaceful observance of Ashura in bordering town Zhob. He has specially thanked Deputy Commissioner, District Police Officer, Assistant Commissioner, journalists and trade union for their efforts, support and personal interest in maintenance of peace by issuing necessary instructions and provision of facilities to Shiite community.

It is to be mentioned that observance of Youm-e-Ashura is to pay homage to the supreme sacrifices of Hazrat Imam Hussain and his companions, who embraced martyrdom in the blazing desert of Karbala for the spreading true message of Islam.