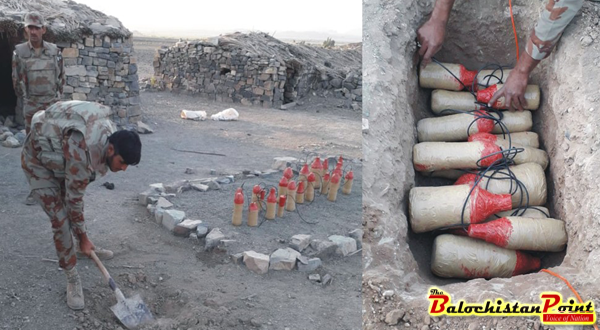 According to sources, the forces on a tip-off recovered 60 kilograms’ explosive material hidden in a deserted area near Sabakzai dam cross on Zhob-Quetta highway.

On getting information FC and Bomb Disposal Squad personnel rushed to the spot and disposed off the IEDs with their professional experience. No arrest has been made till filling of this report.

Dry spell: Zhob district that falls in the ‘monsoon’ range has not received rain since a long time. The prolonged dry spell and weather change have led to a significant increase in dust allergy, cough, chest and throat infections, especially among children and infants. Both the public and private hospitals are packed with patients suffering from flu, coughing, sneezing, high fever and chest congestions. At civil hospital the doctors say that they examine hundreds of patients including women and children on daily basis, suffering from throat infections and dry cough.

Moreover, the dry spell has also caused water shortage in many urban and rural areas here. The district is a producer of garlic besides seasonal fruit and vegetables. Over fifty percent of agriculture land depends on rainwater. In many villages wheat cultivated area is rain-fed (Wuchoba). The dry spell could therefore have a negative impact on the crops yield and losses to the growers.

Published in The Balochistan Point on October 15, 2018