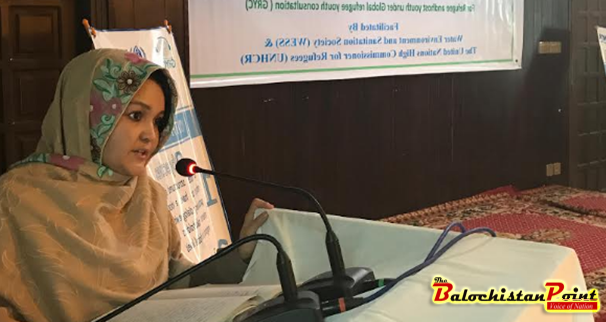 Quetta: The campaign of 16 days of activism against sexual gender based violence is scheduled to conclude today.UNHCR along with its partner has organised different activities under the theme- “Healthy Relationships at Home, in School and in Community.”

At RVs level walks and seminars took place, which were attended by not only youth group members, but also community elders, students and general community. Elders of local community were also invited in different events that will further help integration among the refugee and host community.

Under the 16 days of activism activities UNHCR has also celebrated World AIDS Day, the young refugees took the lead in all performances in the cultural show, presenting dances, songs and short dramas to raise awareness of the disease among refugees and their host communities.

A seminar was also held on this year’s World AIDS Day theme, “Hands Up for HIV Prevention”. Experts from religious, health and social backgrounds presented papers on the greater risks that women and girls face from the disease.

“On this occasion UNHCR emphasizes on improving the resilience of the afghan refugees through various acts in particular enabling and reinforcing potential of youth to face the challenges in life and be prepared for future opportunities,” said Dinesh Lal Shrestha while speaking to the Youth Volunteers.

The 16 Days of Activism against Gender-Based Violence is an international campaign which takes place each year and runs from 25 November (International Day for the Elimination of Violence against Women) to 10 December (Human Rights Day), also encompassing other important key dates. Widely known as the ‘16 Days Campaign’, it is used as an organizing strategy by individuals and organizations around the world to call for the prevention and elimination of violence against women and girls.

2016-12-20
admin
Previous: Anti-polio drive in 30 districts to kick off from today
Next: New medical colleges will be viable source in provision of health care services: Abdul Rauf Baloch