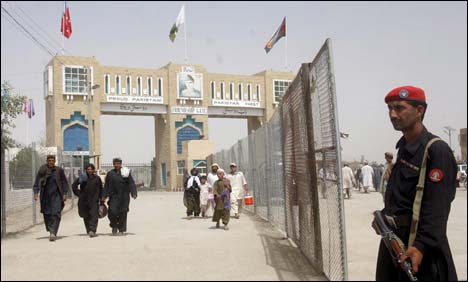 Chaman : At least 11 people were killed including seven Afghan soldiers and several others injured on Friday in a suicide attack that took place at the Pak-Afghan border in the Chaman, the  main town in  the southwestern province of Balochistan for  crossing point of  supplying  goods and equipments for American and Nato troops fighting the Taliban in Afghanistan.

According to Pakistani security officials, the suicide bomber blew him while targeting the vehicle of Afghan border forces.

Meanwhile, Frontier Corps sources said that some Pakistanis were also among the injured.

The  Pak-Afghan border was immediately closed after the blast and  Frontir Corps F.C    persons were called to control the situation.

Published in the Balochistan Point on July 5, 2013

2013-07-05
admin
Previous: Three suspected militants arrested from Kuchlak
Next: Use of Face book