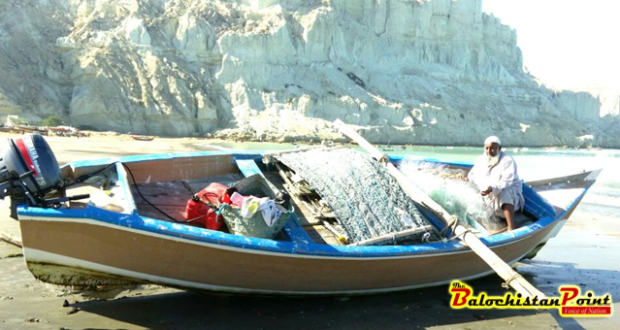 Gwadar: Fishermen’s Quest for Survival With their Ancestral Livelihood

Fishermen’s children play at the “PadiZir” (west bay) beach of Gwadar while seeing their fathers and elder brothers dragging their boats toward the waves of Arabian Sea meeting the shores of Makran coast.

“Things have changed over the years. As a little boy, I used to get fish for free when the fishermen anchored their boats at the shore, but now we find fishermen complaining about the decreased number of fish in the sea. And with that the prices for fish have doubled in less than a decade.”  Hameed Baloch a local resident of Gwadar said while having an evening walk at the beach.

As Gwadar undergoes enormous social and economic changes, a change in fish industry disturbs seven out of every ten local residents. The Deep-sea port,$51 billion CPEC (China Pakistan Economic Corridor), 650 km Makran Coastal Highway connecting Gwadar with the metropolitan of  Karachi and the newly established sub-campus of Turbat University are all remarkable for Gwadar –previously a small harbor town of Balochistan the south west of Pakistan.

The geographic importance of Gwadar and her interjection with three most economically powerful regions of the world have long drawn the attention of the world. However what did not get the attention were the local residents, the fishermen community whose survival in the port city has become difficult lately.

“Fishermen’s issues have been dragging for years and since most of the local citizen’s economy in Gwadar is based on fish production, people have been facing difficulty accessing even basic necessities, such as food for everyday and other basic needs.” Hameed explained and pointed out,“That is the reason why every now and then we hear about the appraisals by the fishermen communities within or around Gwadar.”

Previously the protesters accused the trawler mafias of Sindh for illegally overfishing the waters of Balochistan coast, but during the last few months, the fishermen also alleged the trawler mafias for torturing them and scaring them of their lives. “Fishing is what we can do for living but it too has become athreat to our lives. What else we can donow. We have only one option; to go for fishing regardless of its vulnerabilities.” Asif Ali, one of the local fishermensaid.

Trawlers or fishing vessels operate in deep sea waters actively dragging or pulling trawls through water scooping up along the seabed at high speed. Throughout the world this method of fishing is considered the most destructive form of deep-sea fishing that leaves behind a trial of devastation.

Throughout the world this method of fishing is considered the most destructive form of deep-sea fishing that leaves behind a trial of devastation. 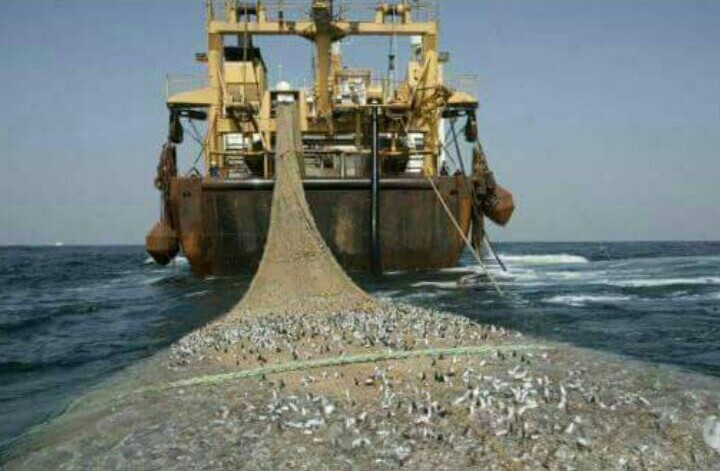 Yet, the owners of the trawlers are addicted to this destructive technique because of its large scale catch that is sold in millions. However, more than one third of its catch, is discarded, tossing back thousands of dead fish and other valuable marine life into the sea.

“Benefit to one specific group has caused drastic decline in marine species, troubled the lives of fishermen communities and has become major reason for the collapse of local economy. Trawlers owners’interests should not be allowed to derail so many lives at once.” Barkatullah Baloch a local social activist said.

He further pointed out, “Exploiting the marine life can herald the arrival for days of hunger for fishermen and would also endanger the extremely valuable fish in the Makran Coast. Yet over the last fifteen years, provincial government could not ban the illegal trawlers from overfishing along the Balochistan coast.”

On the other hand, environmental vulnerabilities have concerned the local environmentalists. Abdul Rahim, a marine expert from Gwadar says, “So far trawlers have not only caused damages to marine ecology through by catch but they are further polluting the water with oil and other pollutants.”

So far trawlers have not only caused damages to marine ecology through by catch but they are further polluting the water with oil and other pollutants.

The most recent protests by the fishermen were in December, 2016 and January, 2017 in Jiwani, Gwadar, Pishkan and Pasni.

“Throughout the years we had been experiencing decline in catch and we knew the reasons; the large sea-trawlers from Sindh had been poaching into ourcoast, looting the fish in our sea but yet they are not completely banned. They torture us and take away our fishing net along with them.” Complained Irfan Pishkani, a fisherman from Piskan.

Balochistan has 770 kilometers long coast line which is about 70% of Pakistan’s total coastal belt. Yet on average the annual fish production is only 1, 47,000 tons of fish which is in danger of further collapse if the trawlers continue to scoop up the marine life. In contrast, Sindh’s annual fish production is 3, 46,000 tons annually with its 350 kilometer long coastal belt. 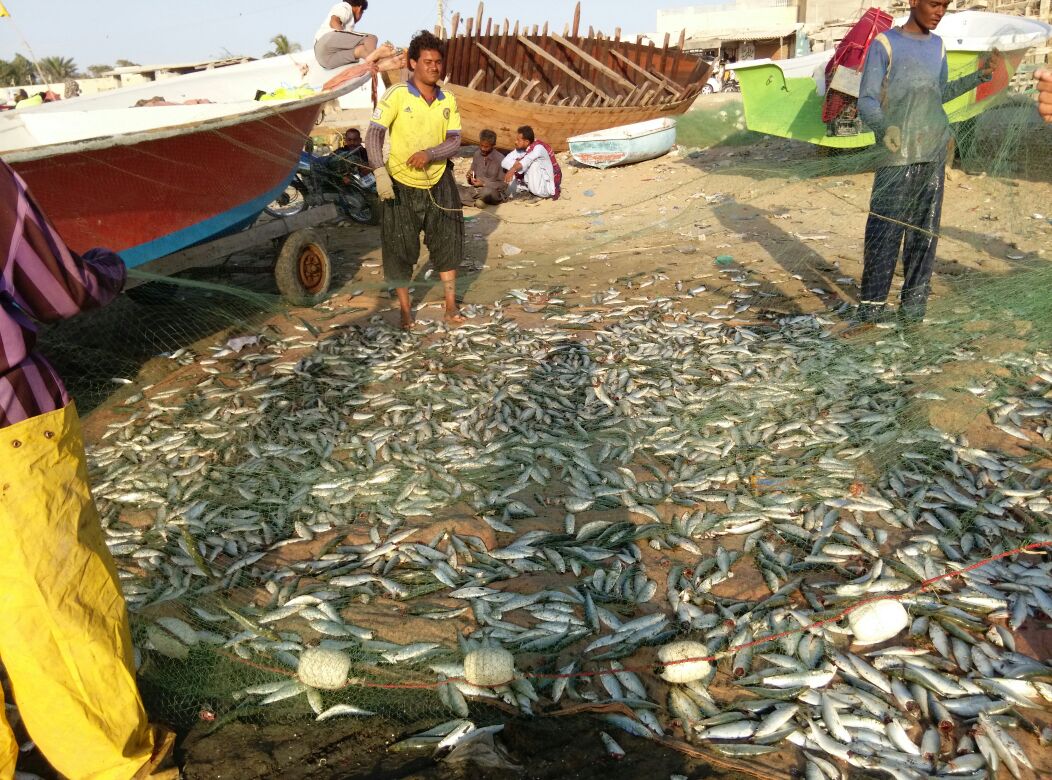 Most fishermen complained that the higher fish production in Sindh is actually because the fish from Balochistan is all scooped up through trawlers and sold in Sindh, increasing their annual fish production. On the other hand, the fishermen also pointed out that the owners of trawlers must have some very strong background; therefore after so many years of protests by locals and workers of political parties even government could not ban them.

“In the recent times, when we (the fishermen) resisted their presence in Makran Coast, the trawler mafias started to torture us (the local fishermen). Two recent cases of torture appeared in Pasni and Jiwani. Our livelihood has far been snatched and now we are further threatened for our lives.Fishing is not a safe livelihood anymore.” Illustrated Irfan.

Formal legislation for reservation of provincial territorial water was first introduced in 1972 for the protection of poor fishermen’s interests using simple fishing methods. However, the policy yet could not preserve the rights of local fishermen and hence, several organizations at local and provincial level sensitized the issues and the rights of fishermen; Balochistan Fishermen Network, MeedhItehad (Fishermen Association) and Pakistan Fishermen Folk Forum.

Previously a representative of MeedhItehad, Khudad  Waju said, “The destructions of trawlers are not new to Gwadar or Balochistan. MeedhItehad has been raising the issue since 2004. And since then we have been hearing about mega projects in the wake of Gwadar Port and CPEC but we have not heard of any mega management for our people yet. And so far there is no policy that preserves the rights and lives of the fishermen in Pakistan.”

K.B Firaq, a local social activist said, “From quite few years, we had worked with Pakistan Fishermen Folk Forum and have created policies to declare fishermen as laborers. This would help protect their rights from being violated and provide them life insurance, free education for their children, health and other facilities. But it has been over a decade to our campaigns and policies, till date we have not experienced any kind of progress.”

The local fishermen claimed that so far the trawlers have not completely been banned. They criticized the government and higher officials that had been in power for yielding for themselves, but disregarding the concerns of the fishermen, threats to their lives, livelihoods and marine ecology.

Mariyam Suleman is a freelance journalist and assistant editor of The Balochistan Point.    Follow her on Twitter @MariyamSuleman

2017-02-25
admin
Previous: Deputy Commissioner and AC Kalat suspended
Next: Is CPEC a game changer for Balochistan?