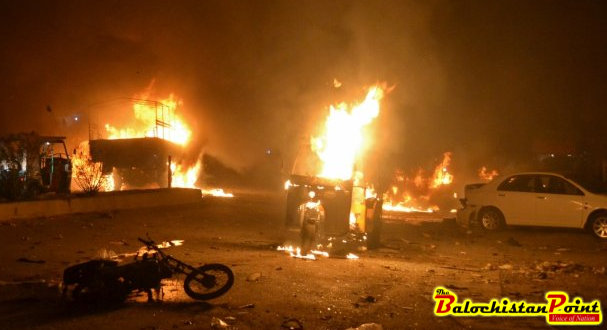 QUETTA: At least 15 people, including eight security personnel, were killed and 30 others sustained injuries in a bomb attack on a vehicle of security forces in Quetta on Saturday night.

According to the details a vehicle of security forces was on routine patrol at old Pishin Stop of Quetta on Saturday night when it was targeted through a bomb. Some nearby vehicles also caught fire after the blast.

Other officials in the area, including the spokesman for the Balochistan government, also confirmed the toll.

Hospital sources said the condition of nine wounded people was critical and the death toll might increase further.
No terror group has claimed responsibility yet.

Director General Inter-Services Public Relations (ISPR) Major General Asif Ghafoor said a vehicle of the Pakistan Army was targeted in the blast. He said the security forces cordoned off the entire area after the blast.