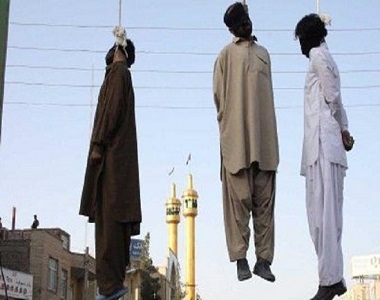 15 prisoners are hanged in Chabahar prison

HRANA News Agency – The judiciary of Sistan province has executed 15 prisoners, on charge of drug smuggling, in Chabahar prison.

According to the report of Human Rights Activists News Agency (HRANA), Habibollah Sarbazi, the reporter and TV producer told to HRANA’s reporter: “Khosro Barahouyi was a citizen of Loutak village of Zabol, two others were two brothers from Rigi tribe, and two others who were also brothers were from Mir tribe.”

He added: “6 family members of Khosro Barahouyi died in a road accident due to slippery road when they were returning from the last prison visit.”

Sarbazi continued: “Mr. Khosro Barahouyi was in Qatar at the time of Tasoua bombing and was arrested when he came back to Iran.”

Habibollah Sarbazi made this comment about the executions that 15 people were executed and all by hanging in Chabahar prison. For some of them, announced charges were related to Chabahar Tasoua bombing attack, and for the others, drug smuggling.

Need to be mentioned later four people were executed on charge of the bombing attack, while there is no document from the charges of these 15.

This source mentioned the probability of retaliatory execution, considering the recent Jaish-Al-Adl actions.

There is no detail available about these executions. (Courtesy: HRANA News Agency)

Published in The Balochistan Point on February 11, 2014

2014-02-11
admin
Previous: Beware!!! Media Monsters out selling Evil
Next: It was an attack not accident