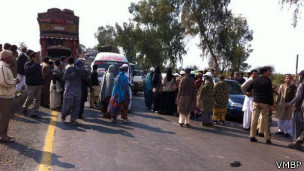 It was an attack not accident

Mama, When you intended to sit in a bivouac with the decorated visual of the disappeared photos of those all innocent children’s fathers and brothers; have gone missing since 2000. The quench of seeing the abducted allowed you and the fellows of you to toil till the last inhalation from the day, a 12 years old daughter of Dr. Deen Mohammad, Mehlab Baloch abandoned her school to join the long protest hunger camp until a gigantic triumph of bringing the disappeared on surface. From the exact day of its emergence to seek justice brought for you a great mislay when after 3years of disappearance the bullet-riddled mutilated body of your own son recovered from the hilly area of district Turbat on 22 November 2011.

You didn’t terrify of it, however it was a situation of agitation that compelled you to keep the secret of wretched death of Jalil Reki to his 10 years acquitted child that his father will come after a period of time. But the struggle of recovery of thousands of missing persons boosted you up to carry it on as the justice was seemed a far-fetched thing effortlessly.

‘’ law and order exist for the purpose of establishing justice and when they fail in this purpose they become the dangerously structured dams that block the flow of social progress’’.

Opposing to the reality and disclosing the secrets of abducted individuals delicate the system of existing law that became a question mark on the human rights organization that often demands for translucent law and order situation exactly from the day the victimized families got ignorance from the court as well.

The shelter managed to keep the photos of missing and extra-judicially killed persons in front Quetta Press Club, at every second of waiting for justice strengthen the sentiments and courage of the companions were sitting under the shadow of it. If you remember my reverend MaMa, you people had been called infuriated at that time and the audience who pass through the way on which the hunger camp was positioned, used to laugh at you by saying, ‘’they called themselves the power to surface those all persons whose photos are decorated in a form of inter-connected chain’’. And many more used to deliberately park their luxurious cars instead of it in order to create convulsion but the caravan kept continuing its expedition for a dreamt destination whether to be fulfilled or not in a place, where failures in establishing law and order are the strongest bottlenecks since the formation of legislation.

The disappearance of our sister Zareena Marri, who was abducted in 2009, sporadically let you move ahead and raise a voice against such injustice in a peace and fair means. But MaMa this as well nudged them and very freshly when Dr. Malik Baloch took oath as a Chief Minister, the shelter which was used to shadow the companions of strikers and the photos of martyred and vanished Baloch persons set on fire and except ashes nothing remained unbothered when MaMa with his fellows reached the next morning to it for recording the long-lasting strike.

The silent eyes of 12 years old Mehlab Baloch in the camp of missing persons beside her disappeared father’s photo quizzed the concerned authority with humility a series of question but they turned deep ears to her. By the passage of time, the intensity in the instinctive abduction, dump and throw police didn’t get slacken and the missing persons list reached to an unlimited figure.

Mama, you have did more than the great peace icon Madiba, who toiled a lot in equalization of race discrimination and against apartheid regime to diminish the suppression of white men over black but you as considered the symbol of justice embarked upon a long march from Quetta to Karachi and from Karachi to Islamabad on foot despite life threating coercions which is a historic record internationally. It is not only destined to Baloch land and Baloch missing persons, however VBMP’s grueling long march is for those all who are suppressed or being treated above the international law inhumanely, which the international court of justice including others philanthropic organizations condemn as considered it an indescribable violation.

Intimidations since the initiation of this great determination didn’t slacken the bouncing courage of the sturdiest walkers as they were threatened by various means on the way to seek justice for the victimized families, in the first phase of grueling long march on foot from Quetta to Karachi in the most disturbed area of Kuzdar tootak, have been scared in the place where currently a mass grave has been recovered containing almost 160 decomposed bodies and MaMa with his companions including the most respected women even frightened to be slain if they move a step ahead to it but the bravery of the marchers let slacken off all the fears and committed to walk on foot rather than abandoning from it owing to trepidations.  This was not the begging of intimidations before this the prestige fellows including MaMa, senior vice chairman of VBMP and Nasrulah, the chairman have been frightened for raising the voice of missing person but steadfastness from the brave kudos members had shown it nothing except coward act of state inter-service intelligence.

William Shenstone says; Zealous men are ever displaying to you the strength of their belief, while judicious men are showing you the grounds of it.

Seeing Mama and his co-workers including the prestige women being not intimidated directly or indirectly the failures of concerned authorities compelled them to try a homicidal attack by a loaded truck and called it an accident which in authenticity looks the lowest degree of embarrassment has been committed by the coward men of inter-service intelligence authority in Okrara, Punjab, as it was mentioned by MaMa in his each interview that they are being daunted and the fearless members of long march families are on the verge of it too. Threat to avoid moving in such a great purpose in a non-violent way might have brought a red signaling mark on the characters of those hands who are deliberately giving it a flying wings not to be taken into consideration.

Mama in such highly a dangerous area where at every step of walk on foot the cars and loaded trucks tried to hit you with fellows, how could you manage to move ahead to seek justice?

It is said the truck which tried in ruin to hit you was not a deliberate act, however it happened owing to the failures in breaks, if it so at that juncture what you say about the murderous attack by a Car in Hub Choki when the walkers were about to reach Karachi after passing through the terrains of mountainous areas?.

Mama, why these all trucks and cars find the #VBMP’s caravan the most appropriate mark of hit on the congested highways of Punjab?

After being fail in such coward acts creates a worth mentioning question, but to whom the quizzing session be attended. No one seems attentive towards the cry of Mehlab Baloch and Haider Ali, whose fathers are missing for more than 4 years each. Our yellow Media getting its color change like Chameleons by every second that passes and move rapidly to give half an hour coverage to a marriage ceremony but not the walk has initiated for recovery of humanity that has gotten in foulest shape.

Amazing Courage the Marchers have shown has disclosed all the secrets that why saying truth is a sin and they are Living Legends who are undaunted by threats, inconveniences, extreme weather, rain, cold and all that the state authority has thrown at them continue to Walk for entire Humankind.

Mama, you and your companions still need to walk on foot for hundreds kilometers and undoubtedly have to face such more murderous attacks, because VBMP has recorded the world longest long march on foot for safe recover of the missing Baloch and don’t forget such cowardly acts never get success.

Published in The Balochistan Point on February 13, 2014