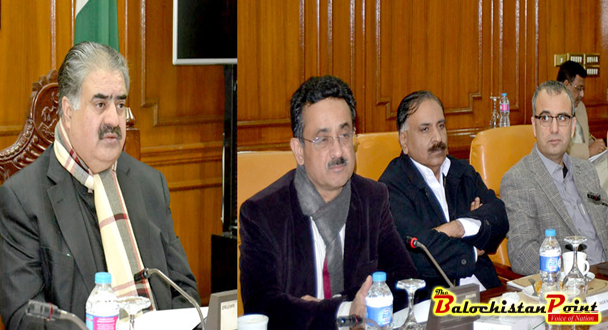 Quetta: Chief Minister Balochistan, Nawab Sanaullah Khan Zehri has directed that Gwadar would spread in future thus keeping in view the requirements of future planning should be made in the port city.

He issued this direction while chairing the first meeting of Special Economic Zones Authority (SEZA) here on Wednesday.

Several important decisions were made in the meeting for the promotion of industrial activities in the context of Economic Corridor. Following implementation of these decisions an era of industrial development would began in the province that would provide countless opportunities of employment.

Terming establishment of economic zones in Bostan and Khuzdar and induction of these projects in China Pakistan Economic Corridor (CPEC) a significant move in the meeting of in Beijing, the Department of Industry was directed for appointment of consultants for early commencement of projects.

Briefing the meeting, Secretary Department of Industry Mr.Noor Muhammad Johgezai apprising the meeting said that machineries first time imported for the Special Economic Zones would be given discount from custom duty and these zones would be exempted from income tax for five years. He said that government would provide basic infrastructure for economic zones which is aimed at to encourage the investors and industrialists.

The meeting also directed for appointment of consultant for preparation of feasibility report who would produce report within six weeks. Moreover, it was also decided to implement establishing of proposed economic zones in Dera Murad Jamali, Dasht, Lasbela and Quetta.

The meeting approved Rs 50 million endowment fund for the establishment of SEZA and it was also decided that federal government would also be requested for provision of Rs 50 million in this connection.

Addressing the meeting, Chief Minister Nawab Sanaullah Khan Zehri said that in future Gwadar would spread thus keeping in view the requirements of future, planning and strategies should be made.

He said that our competition is with entire world thus we had thorough preparation before participating in GCC meeting that yielded positive results as 12 projects were incorporated in the CPEC.

Nawab Zehri said that the more we prepare ourselves the more investors would divert towards Balochistan, adding that promoting industrial development is our topmost priority.

He said that he would himself monitor the projects of SEZA and every month its review meetings would be held.

Published in The Balochistan Point on January 25, 2017