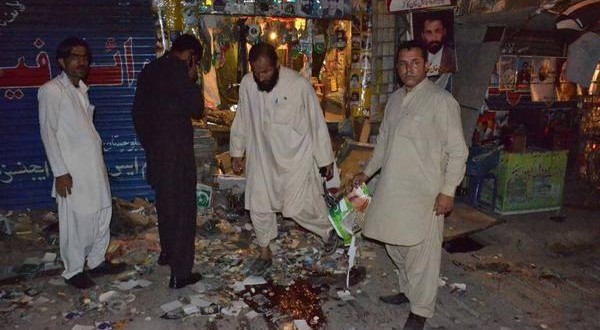 Quetta: A bomb blast outside a Flags Selling shop, on Prince road Quetta, has left 20 people wounded, on Tuesday evening.

The bomb blast caused injuries to 20 people including a policeman and children. The target of the blast was the Flags Selling shop that was situated on the busy commercial center of prince road.

The bomb blast created a panic among the people who were present near the targeted location. The injured victims were shifted to Sandmen Civil Hospital Quetta. Large contingents of Police and Para Military force reached after the blast and cordoned off the area.

Conflicting reports have appeared about the nature of the bomb blast. A local newspaper has quoted the Bomb Disposal Squad and claimed that bomb was detonated with the help of a Time-device. On the other hand Dawn has quoted Superintendent of Police Imran Qureshi and claimed that the bomb was thrown at the shop by two miscreants riding on a motor Bike. No organization has so far claimed responsibility for the attack on Prince road.

In a statement issued to the press Sarfraz Bugti, Home minister of Balochistan, has condemned the prince road blast and added that bomb blasts will not prevent the government from celebrating Independence Day in Balochistan.

In a separate incident, a rocket was fired in Ziarat from an unknown location. No damage was caused by the rocket but according to sources, it was aimed at Ziarat Residency which will be inaugurated by Prime Minister Nawaz Sharif on 14th August.

Published in The Balochistan Point on August 12, 2014.

2014-08-12
admin
Previous: Census is not acceptable with presence of Afghan Immigrants – National Party
Next: In Pakistan establishment decides who forms government: Akhtar Mengal