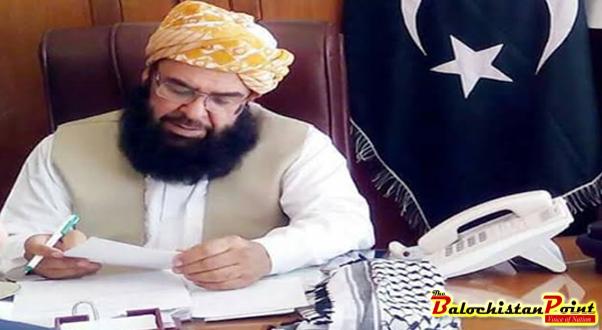 QUETTA: At least 25 people lost their lives while over 30 others, including Deputy Chairman Senate of Pakistan Maulana Abdul Ghafoor Haidery, were injured on Friday in a roadside blast in Mastung area of Balochistan, officials said.

District Health Officer in Mastung Dr Sher Zaman said, “25 bodies have been shifted to two hospitals in Quetta,” adding that 35 injured were also being transferred to Quetta.

Maulana Haidery’s  convoy was targeted in the blast when the  deputy chairman was returning from an event at Ittehad Bainul Muslimeen at Jamia Masjid Hammadia when the explosion took place.

According to Associated Press, the Islamic State group has claimed responsibility that it had carried out the deadly attack on the lawmaker in Balochistan.

The deputy chairman Senate has been shifted to the Combined Military Hospital (CMH) in Quetta, said DIG Abdul Razzaq Cheema.

The blast was very powerful, said Maulana Haidery , adding that though he is not seriously hurt, he is deeply saddened by the deaths which had taken place.

The area has been cordoned off by security forces and investigations are underway. Balochistan Chief Minister Sanaullah Zehri has directed relevant officials to immediately submit a report on the incident.

Later, in an interview to a news channel in, Maulana Abdul Ghafoor Haidery said that he received minor injuries.

The District Police Officer Mastung Ghazanfar Ali, said that Haidery escaped as he was not sitting in the car when the blast took place. ”It could be a suicide bomb attack but it is too early to say for sure,” he said.

Speaking to the media JUI-F chief Maulana Fazulr Rehman condemned the attack on Maulana Abdul Ghafoor Haidery.  “Many of our dear companions have been martyred” He added. Maulana Fazlur Rehman expressed his condolences to the families of the martyrs terming the attack a very painful incident for the nation and particularly the JUI.

Prime Minister Muhammad Nawaz Sharif has strongly condemned the attack. He  expressed his concern for the well-being of Maulana Haidery.

2017-05-12
admin
Previous: Letter: Kund Malir, beautiful but neglected
Next: BSAC: On the way to find the creams of society