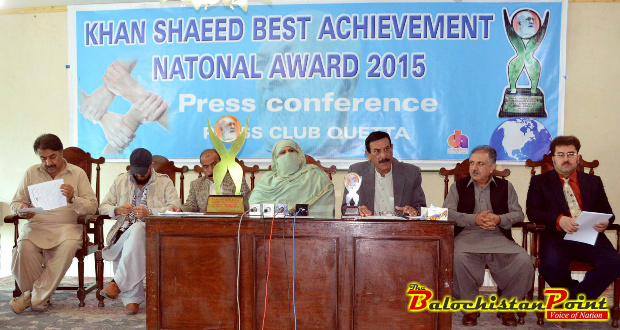 This announcement was made during a press conference in Quetta Press Club, on Sunday.

Shortlisted candidates for Khan Shaheed Best Achievement National Award include people who have given sacrifices for Balochistan and have played special role in the development of backward province.

Stated purpose of organizing this award ceremony is to encourage individuals and institutions to contribute in development of country.

“This award will be given to those who have served humanity, national development and worked for the welfare of the nation” said Awais Jadoon, Focal Person for the awards.

Tahir Mehmood, Member of Provincial Assembly said, “selection for this award was purely on merit bases without discrimination of any religion, cast, race and language, and we are giving awards to everyone on the basis of their services.”

Published in The Balochistan Point on November 16, 2015