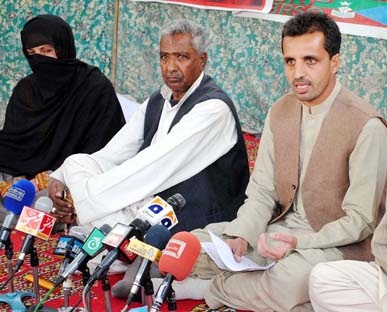 70 bodies had been found during the tenure of the incumbent government: Nasrullah Baloch

Quetta: Voice for Baloch Missing Persons Chairman Nasrullah Baloch said that around 70 bodies had been found from different areas of Balochistan during the tenure of the incumbent government.

Addressing a press conference along with VBMP Vice Chairman Mama Qadeer Baloch at a hunger strike camp outside the Quetta Press Club for the recovery of Baloch missing persons, he said that 26 missing persons’ bodies had been found from different areas of Karachi.

He claimed that missing persons were being killed in fake operations in Bolan, Ispalinji and other areas. “We will admit the government’s seriousness [on the issue] after [seeing] their practical steps against the officers who were involved in the kidnapping of Baloch political activists.”

He said his organisation had also provided evidence in the Supreme Court in this regard, and the apex court had passed orders, but no step were taken by the government for the arrest of those involved in enforced disappearances of Baloch missing persons. He urged the United Nation and other international organisations to take notice of human rights violations in Balochistan.