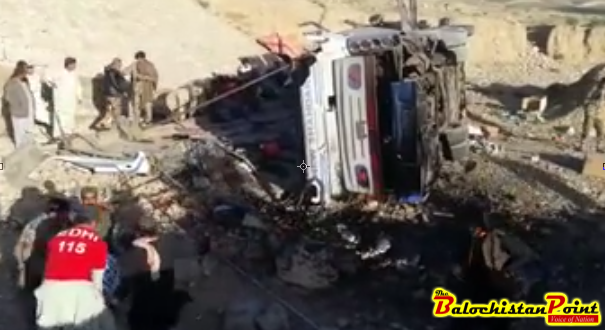 QUETTA: At least nine people, including two women, dead and more than 25 injured after Quetta-Karachi bound passenger Bus fell overturned near Lakpass in the outskirts of the provincial capital Quetta on Friday morning.

According to Police, the Karachi bound passenger bus was coming from Karachi when it overturned near Lakpass due to high speeding early morning Friday.

Rescue workers and police rushed the spot and deceased and injured were immediately shifted to Civil and BMC Hospitals for identification of the dead and treatment of injured persons.

Medical Superintendent (MS) Civil Hospital Fareed Sumalani said that they had received nine bodies, including two women, and more than 25 injured being treated in Hospital. “We have declared emergency at the Hospital.” He added.

Sources said that the tragic incident took place as driver was very tired and he lost control over the bus at a sharp turn.

Chief Minister Balochistan Nawab Sanaullah Khan Zehri has expressed regret on the tragic accident and loss of innocent lives. He directed Secretary Health to provide quality health treatment to the injured and provide all assistance to the heirs.

Published in The Balochistan Point on April 8, 2017