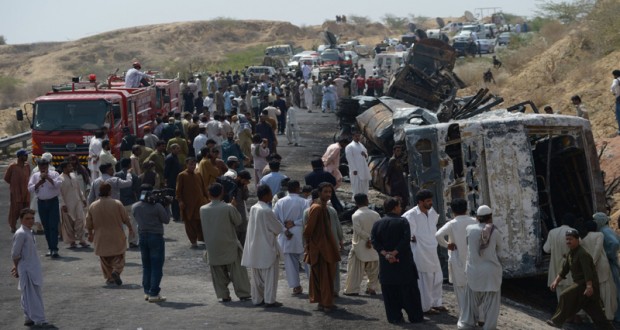 Quetta: A devastating road accident has killed 11 people and wounded 31 when a passenger bus collided with a truck in Lasbela, on Monday.

A Karachi bound coach travelling from Quetta collided with a truck when it tried to overtake another coach in Uthal area of Lasbela district, according to Police sources.

Rescue and security official rushed to the scene and the injured were transported to hospitals in Uthal and Karachi. Drivers of Truck and coach both died on the spot.

Most of the dead passengers have been identified to be residents of Quetta, according to media sources.

Quetta –Karachi road, known as RCD highway, is unsafe for driving and many deadly accidents have taken place in the past. Governments of Balochistan and National Highway Authority have not taken any steps to avoid possibility of accidents on the RCD Highway.

Published in The Balochistan Point on October 20, 2014