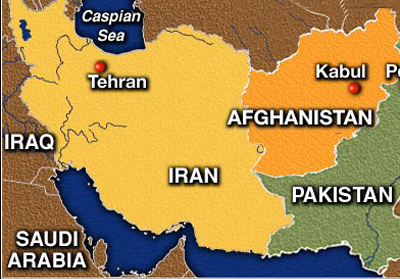 As firing across the Line of Control (LoC) continues, tensions at Pakistan’s other border are gradually boiling over.

Recent violations on the part of Iranian border guards have undermined relations between Pakistan and Iran with each side blaming the other for the flare up.

Iranian claims of the existence of militants in Pakistan’s territory and the latter’s growing concern over repeated incursions by Revolutionary Guards into its side of the border have even raised the risk of a military standoff between the two countries at the Balochistan border.

On Friday, Iranian border guards had stormed inside the Mand area of Balochistan and had attacked a vehicle of Frontier Corps, killing one soldier and injuring three others. Khan Wasay, a spokesman for FC troops in Balochistan, told Dawn that at least 30 Iranian border guards had entered into Pakistan’s bordering town of Nokundi and made the residents hostage for six hours.

These incidents prompted Islamabad to lodge formal protest with Iran over the border violations which in response demanded action against what it claims are militants based in Pakistani Balochistan, a charge vehemently denied. The adverse developments have once again deepened the trust deficit between the already skeptical neighbors. Iran also called Pakistan’s ambassador in Tehran and lodged a strong protest over the issue of militancy.

In February this year, Jaish ul-Adl (The party of justice) abducted five Iranian border guards in the Sistan-Balochistan province, leading to threats of military action from Iran’s Interior Minister Abdulreza Rahmani-Fazli inside Pakistani Balochistan. His remarks shocked and annoyed the Pakistanis which replied that it would not tolerate such a move.

Iranian officials have repeatedly claimed that the militants took the border guards into Pakistani Balochistan, a charge officials in the country denied at that time.

In March, the kidnapping prompted the two countries to hold a joint border commission meeting in Quetta, the capital of Pakistan’s Balochistan province, to discuss ways to recover the hostages. The Deputy Governor of Sistan-Balochistan, Ali Asghar Shikari, visited Quetta to convey Iran’s message to his Pakistani counterparts.

“The kidnapping of the guards has harmed the feelings of the Iranian people,” he told a press conference.

Four of the border guards were set free in April, but a fifth had been killed by the militant group in late March.

The Iranian Student News Agency quoted a Jaish ul-Adl statement suggesting that a Sunni cleric had mediated to bring about the guards’ release, while Fars News reported that the fifth guard’s body had been delivered to the Iranian Embassy in Pakistan.

Iran has frequently claimed that Sunni militant groups roam freely in Pakistani Balochistan, and use the area as a refuge after carrying out terrorist attacks in Iran. The groups claim they are deprived of religious, political and social rights.

Meanwhile, Pakistan, which shares a 900-kilometer border with Iran, has accused Iranian border guards of making violent incursions into the Pakistani border town of Mashkail, according to Akbar Hussain Durrani, the Home Secretary in Balochistan. Rockets fired by Iranian guards have killed approximately around one dozen Pakistani civilians in the border region over the past decade.

Iran not comfortable with development of Gwadar Port

A senior official of the Home Department of Balochistan, who spoke on the condition of anonymity, says that Iran supports Baloch separatists fighting against Pakistan.

He suggested that this was related to Iranian misgivings about the development of the Gwadar Deep Sea Port. Gwadar, which is around 75 kilometers east of the Iranian border, will compete with the India-backed Iranian port at Chabahar by providing trade access to land-locked Afghanistan and Central Asian States through Pakistan.

Suspicion and blame games have marked the last decade of relations between the two countries. Iran is quick to point the finger at Pakistan whenever terrorists strike in Sistan-Baluchestan. The region is home to ethnic Baloch, who adhere to the Sunni strand of Islam. The Baloch say they are treated as second-class citizens in Iran. Professor Rahim Raheemi, an ethnic Iranian Baloch and a former professor of political science at Abadan University in Iran, who fled to Quetta in 2004 to seek political asylum, says, “We are marginalized and deprived of our due rights.”

In 2004, the Iranian spy service attacked Professor Raheemi’s residence in Quetta and killed one of his young colleagues. Professor Raheemi told the author on the same night that two unknown motorcyclists opened fire on his house in the Hudda area of Quetta, killing a young man who was living with him.

“We are not safe even here. The Iranian spy service is behind the murder of my young colleague,” Raheemi says. The exiled ethnic Baloch Iranians seek support from the United Nations High Commissioner for Refugees to get political asylum. “We are fighting for Baloch rights inside Iran,” he says.

Iran and Pakistan have formed a joint border commission to resolve issues relating to their long frontier.

Meanwhile, people living on both sides of the border, most of them ethnic Baloch, continue to suffer. They share historic, cultural, religious and social ties, but terrorist incidents have prompted the two countries to maintain tight security along their porous border, where previously there used to be few restrictions.

Those living in Pakistan’s border districts are completely dependent on Iran in commodities and jobs. Riaz Baloch, a resident of Pakistani Balochistan, says that people from the region must now go through strict security checks to enter Iran. Baloch says members of his family live in Iranian Sistan-Balochistan, but deteriorating relations between the two countries mean they cannot see one other.

The two countries must take practical and effective steps to remove the trust deficit. Iran must stop cross border attacks on Pakistani soil, and Pakistan has to address the grievances of Iran. Both countries must make joint efforts to curb the menace of terrorism and extremism. The two neighboring countries cannot afford tension at the 900km porous border since both are faced with common threats of terrorism and extremism.

Republished in The Balochistan Point on October 20, 2014