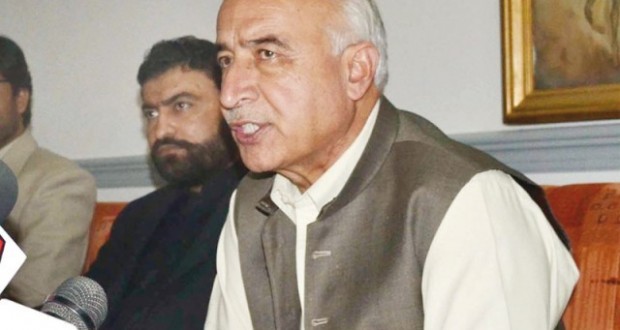 QUETTA: Chief Minister Balochistan, Dr Abdul Malik Baloch has said that Afghan war and the international policy towards Jihad had spoiled the peace of the world.

He said eradication of extremism was associated with poverty and unemployment, adding that better ties between Pakistan, Afghanistan and Iran were in the interest of this region and all three countries.

He expressed these views addressing and answering the questions of participants of Allied Officers hailing from 25 friend countries getting training in Staff College Quetta, here on Tuesday.

Chief Minister Balochistan said that after Soviet invasion in Afghanistan and the policy of international powers towards Jihad badly affected the peace across the world. “In order to get rid of extremism, terrorism and sectarianism poverty, illiteracy and unemployment need to be addressed forthwith,” he said, adding that international community would have to play its role in this connection otherwise the demon of poverty would continue to fuel terrorism and extremism.

He said that we wanted better relations with all nations particularly with our neighbours as the good ties between Pakistan, Afghanistan and Iran were not only in the interest of entire region but also all three countries.

Dr. Abdul Malik Baloch said that provincial government was struggling through a democratic way to achieve its rights from the centre, adding that 18th Constitutional Amendment was a healthy development in empowering provinces and strengthening democracy.  “Other than five subjects all other departments have been transferred to provinces, and without the consent of provinces no agreement could be made by centre,” he added.

Responding to a question, he said that they were making efforts to ensure the quota of Balochistan in federal services and have appropriate representation in centre.

Chief Minister Balochistan told the participants that improvement of law and order situation in the province was the top priority of the provincial government while government was also striving hard to improve agriculture, livestock, minerals, fisheries and mining. “Govt. has taken steps for capacity building of Police, Levies and other law enforcement agencies due to which law and order situation has improved in the province, and kidnapping for ransom has reduced to a great extent,” he said.

He said that still 2.3 million children were out of schools and Rs 62 billion was needed to the provincial government to open schools and ensure basic facilities while the government had only Rs 45 billion in hands.

He said that first time in the history of the province the government allocated 26 per cent of budget for educational sector adding that a huge amount had also been set aside for improvement of health sector.  “We are also facing energy crisis but after completion of two main transmission lines in the province the energy issue is being resolved that would help improve agriculture which would bolster the economy of the people”, he said.

Referring to Baloch insurgency, chief minister said that government was trying to initiate talks with Baloch resistance groups and bring them to dialogue table.

Chief Minister said that provincial government would provide every possible security to investors as there was a vast opportunity of making investment in Balochistan. “We would soon organize Balochistan Forum in Islamabad that would attract the investors,” he added.

Published in The Balochistan Point on October 22, 2014

2014-10-22
Editor
Previous: Conflict Escalation At Pak-Iran Border
Next: Height Of Incompetence: Sariab Flyover Not Complete After Passing Of Four Years