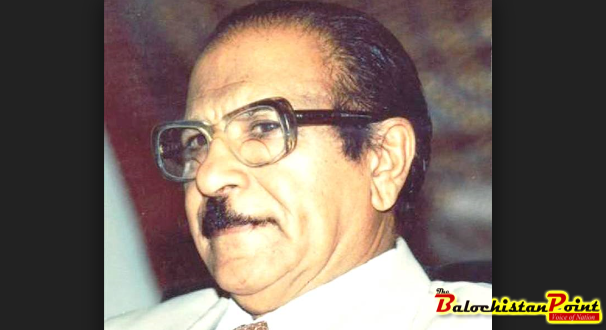 A humble tribute to the vivid memory of the eminent scholar and researcher Dr. Nabi Bakhsh Khan Baloch

By: Ayub Baloch.
It was the occasion of deciding the ‘Life Achievement Award’ for the year 2005. The panel of judges comprised Mazer-ul-Haque Siddiqui, Dr. Farman Fatehpuri, Prof. Fateh Muhammad Malik, Ayaz Khan Daoodzai, Dr. Riaz Majeed, Madam Zatoon Bano, Nisar Aziz Butt and me, Ayub Baloch. The meeting was in progress at Academy of Letters, Islamabad and a number of highly deserving names from the realm of literature and literary research were being considered. The panel, after intense deliberations, unanimously decided in favour of Dr. Nabi Bakhsh Baloch, in recognition of his invaluable literary, intellectual and research contributions.

After the announcement of the decision in a press conference by the Chairman PAL, I had the opportunity to congratulate him on phone and enquire after his health. He was in Hyderabad not feeling well. His voice was a bit meek but confident. I respectfully asked him, Sir, It is quite a long time now that you had been away from Quetta ?

” I had no invitation from you, my dear “, he answered.

December 16, 2017 marked his 100th birth day. His birth anniversary was formally celebrated by various literary and intellectual institutions particularly in Sindh where he was offered profuse homage by eminent scholars for his distinguished and versatile work. He was known internationally as one of the most towering and top ranking scholars of Pakistan.

The entire country was his prestigious intellectual jurisdiction but Sindh and Balochistan were privileged to have his scholarly focus. He was an unmatched authority on both. History, Islam,Literature, Education, Anthropology, Linguistics, Folklore and a number of component of intangible cultural heritage were his areas of interest on which he wrote volumes of books, research articles, taught students, administered universities and spoke to audiences through out his life. For an instance, the segment on Baloch and Balochistan in Encyclopaedia Britannica was also written by him.

On his birth anniversary, I contemplated some of his invaluable memories and few occasions where I had the opportunity to meet him or the precious gifts ( books, research articles ) that I received from him. Those who knew him well may agree that not only his scholarship and wisdom but his wit was also remarkably refreshing. We were celebrating the Silver Jubilee of the Balochi Academy and Dr. Baloch was our Honourable Guest. Then I was the General Secretary of Balochi Academy. As moderator I was supposed to invite him to address a select audience in a jam packed auditorium. As one of his humble admirers, I very respectfully introduced him and requested him to approach the podium.

At the outset he began ” Few seconds before I had given Ayub Baloch 100 marks but now I deduct 5,  …… because he praised me too much “.

He was a very kind hearted person adorned in simplicity but highly disciplined with strict principles . Once he wanted to go shopping and I took him to a market thinking that I would pay for his purchases. He bought few simple things and when I tried to pay, he resisted and then told me ” look, neither I pay for you nor you should for me….. In case you insist shopping discontinues here and now “.

Be it myself individually or the members of Balochi Academy, he used to share his vast knowledge with us generously and some time he assumed the advisory role of an elder. Once he was the guest of honour of the literary evening of Balochi Academy, then Dr. Abdul Malik Baloch was a Minister. He and Kahuda Mir Akram Baloch ( also a Minister ) were also there. Dr. Nabi Baksh Baloch was sharing his insight with participants on how the institutions can successfully redeem the invaluable history and heritage of people along scientific lines. After serious thoughts he got to a lighter mood and reiterated that coming to serving your culture, nothing is small or meaningless. Even small contributions matter much. He shared with the participants a joke from the rural setting:

” Once a farmer took his cow to a town to sell her for a couple of thousands. While praising her to buyers, the cow attracted a moneyed man who agreed to buy her for ten thousand, much higher than the price expected by the farmer. He instantly sold the cow. The farmer considered him a God sent kind buyer so he asked his name that he told him. Extremely happy, when the farmer reached home he narrated the story to his wife. Astonished to hear the episode the wife asked him about the good name of the kind person, which the farmer didn’t remember.

” It was something like the name of a bird ” hinted the farmer. Now the wife thought that a kind rich man like him must have a name from among big birds so she started with Uqab. No, said the farmer. Then Shaheen, no. Then Mo’or, no. Then Konj, no, Tellurre, no. Eventually, being tired of hearing many names of big birds, the farmer said, ” Come down to smaller birds, lucky lady, I fear it will be lost for ever, if you keep on looking for it, only among big birds “.

In matters of fieldwork, Dr. Baloch preferred to go by the book. Instead of relying on secondary data he preferred to be in the field under study as a ‘participant observer’, a favourite research  tool of anthropology. Some years back, I went to a village near Gaddani named Southern Maoali. While talking to people who were sharing with me their rich cultural knowledge, I asked, had anybody ever come to that village to study their culture ? An elderly promptly answered, Yes, one Waja came here many years back, his name was Nabi Bakhsh Baloch.

I recall once he was talking about ancient Mekran and then turned to Fanzbur, Panazbur and then to Panjgur. ” Your Town always fascinated me, I wanted to see it but I could not find time “. Latter, when my friend Dr. Baddar Ujjan was Deputy Commissioner there, Dr. Baloch went to Panjgur and visited ancient, pre-Islamic as well as Islamic heritage sites and as he put that, ‘observed numerous archaeological evidences and historical clues relating to its past ‘.
From Panjgur he came to Quetta. It was another opportunity for me to see and hear him. I had many questions which were briefly answered but for details I thought we had to wait for his book he was considering to write on Balochistan. We had a round of the city.  At a point he turned to me, ” Ayub, who designed these roundabouts . These structures have totally blocked the scenic view behind, for which Quetta was always famous. What a bad aesthetic taste” he queried.

I requested him to visit the institute of Balochistan studies, founded by me, which was located in Model Town (Insta Building as it was then called). He agreed and was very pleased to see its Resource Center where students were busy reading books and taking notes. I still remember his very kind encouraging words that I always cherish. Students assembled around him and asked him questions. A youngster politely asked him, ‘Sir, Mir Chaker is my hero. But one of my friends tells me that he was  not real because he is not mentioned in books. What do you say Sir’ ? Dr. Baloch looked at him, ‘ you seem to be enlightened but why your friends are so ignorant. Then he asked, whom does your friend consider his hero? ” He considers Sher Shah Suri as his hero “, the young man answered. Dr. Baloch smiled and said, ” Mir Chaker is mentioned in Sher Shah Suri’s book. Ask your friend to read some good books, particularly his hero’s book “.

I learnt a lot from him and received a number of his books and research articles directly from him. I consider him my teacher as well as mentor, however I miss very much his scholarly lectures, analysis, writings, interpretations, translations and particularly his wit and wisdom.  Dr. Baloch was truly a versatile scholar and a very kind human being.