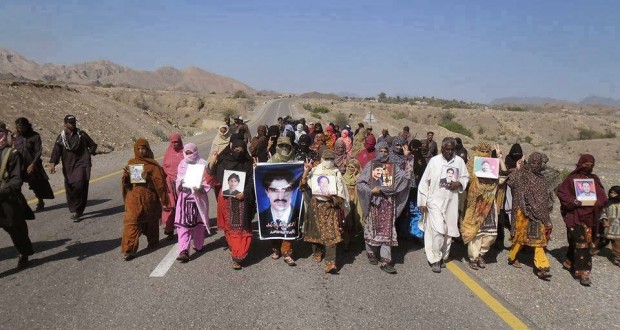 A long march to mark injustice

The Voice for Baloch Missing Persons (VBMP), an organization comprised of family members of abducted Balochs, is holding yet another march to highlight the issue of missing persons.

Seven hundred and thirty kilometers long, from Quetta to Karachi on foot, this march was launched on October 27th. Mainly women and young Baloch as well as VBMP members are marching to raise awareness about alleged illegal enforced disappearances and the murder of Baloch political workers in Balochistan. This march for justice proves the failure of Balochistan government and judiciary and invites international human rights organizations to take notice of human rights abuses in mineral rich Balochistan.

After more than 1300 days of peaceful strikes, this 730 kilometer march shows the determination of the relatives of these missing persons. Mama Qadeer, Nasrullah Baloch and Farzana Majeed, along with dozens of other families of victims are committed to continue their mission until they see the safe recovery of the disappeared Balochs. Unfortunately many, including Mama Qadeer’s son Jaleel Raki and hundreds of journalists, human rights activists, teachers, writers and intellectuals etc. have been turned into bullet ridden bodies. Yet time has confirmed that this struggle was not only for a few people but for all the missing Balochs.

The participants of the long march are walking from Quetta to Karachi. Hundreds of people would have joined the march had death threats not been made against relatives of the Baloch missing persons. It is worth mentioning that the members of VBMP continue to receive death threats and that their protest camp was set on fire.

The VBMP has been protesting for last four years, yet there have been no remarkable developments regarding the recovery of the missing persons. The VBMP leaders allege that current rulers intensified the kill and dump policy in Balochistan and intelligence agencies have picked up a large number of Baloch political workers to suppress their voice. Officials disagree with the claims.

According to the VBMP, around 18000 Baloch have been abducted by state forces since 2000 and 1500 killed under state custody.

The chairman of V.B.M.P Mr Nasrullah Baloch says that the previous government recovered and released a few abducted Baloch activists, but the current government of Dr Malik Baloch failed to recover any of the disappeared. ‘Even relief activists and people from earthquake affected areas of Balochistan are being abducted,’ he says.

The Chief Minister of Balochistan, Dr. Malik Baloch, initially linked peace in Balochistan with the safe release of missing persons and asserted that his government was committed to bring an end to the recovery of mutilated dead bodies in the province. Recently however he acknowledged before the media that his government could not successfully ensure the release of Baloch missing persons.

According to Mama Qadeer Baloch, Vice Chairman of Voice for Baloch Missing Persons, the aim of the protest walk is to bring the plight of Baloch people to the attention of human rights groups so that they can take concrete steps to end human rights violations in Balochistan. He says the government used different tactics to deter and harass the participants of the march but they refuse to be intimidated by such threats. He added that their protest(s) would go on until all the abducted Baloch are recovered and released.

Until this time the Asian Human Rights Commission (AHRC) is the only organization which has expressed its solidarity with the Baloch people in their struggle for the recovery of missing persons and condemned the extrajudicial killings.

The officials of The Asian Human Rights Commission (AHRC), with great concern, stated, “The Balochis are being pushed into a corner for demanding their fundamental rights. The civil society must join the long march and make it successful so that the menace of disappearances and extrajudicial killings can be eliminated from the country. The civil society organizations must arrange camps along the route of the long march and provide all the essential items to the protestors, especially the women and children.”

The participants of the long march under the sponsorship of Voice for Baloch Missing Person will camp in front of the Karachi press club when they reach their destination. Though they have camped and marched every year to Karachi, this year’s long march gained the attention of some national and international news organizations and thousands of tweets in favour of the long march are a great moral support. (Courtesy: View Point Online)

Republished in The Balochistan Point on November 16, 2013