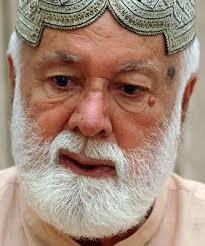 A tribute to the late Nawab Khair Bakhsh Marri: Are the power brokers ready to listen?

KARACHI: Pakistan Peace Coalition Secretary General BM Kutty and Pakistan Institute of Labour Education & Research (PILER) Executive Director Karamat Ali have expressed deepest condolences to the family members, friends and political associates of Nawab Khair Bakhsh Marri, who passed away in Karachi recently, says a press release.
The condolence message reads: “Despite varying opinions on the late Nawab Khair Bakhsh Marri’s political life and achievements, it is our considered view that in his death Balochistan has lost one of its frontline leaders from the older generation. Out of the four Baloch nationalist leaders, known for their respective contributions in the making of the modern Baloch nationalist persona, Sardar Ataullah Mengal is the only survivor, after the death of Mir Ghous Bakhsh Bizenjo in 1989,  Nawab Akbar Bugti in 2006 and now Nawab Khair Bakhsh Marri.

“It is common knowledge that the feeling of alienation among the Baloch towards Pakistan can be traced back to the time of the controversial accession of the state of Kalat to Pakistan in 1948. Not only was Balochistan denied its legitimate status as an equal federating unit of Pakistan but a series of military actions by the state and resistance movements by the Baloch marked the subsequent 20 years.  There was a short period – between the mid-sixties and early seventies – in Pakistan’s troubled political history when these four leaders worked together, in a common mission to steer the Baloch nation away from its tribal backwoods into a modern parliamentary democratic dispensation. It is, however, true that all through this period of working together on a common agenda, Nawab Khair Bakhsh did remain sceptical about the possibility of the Baloch national question being successfully addressed under the bourgeois democratic system. His scepticism deepened further after the horrific events in East Pakistan in the aftermath of 1970 general elections and the subsequent creation of Bangladesh.

“After the formation of the first ever elected democratic government in the history of Balochistan by National Awami Party (NAP) in 1972, Nawab Khair Bakhsh chose to go along with the first ever democratic experiment in Balochistan, in his capacity as the provincial chief of the ruling NAP. But, the manner in which that democratic experiment was thwarted through a series of federal government actions culminating in dismissal of the government, banning of the NAP, arrest and trial of the NAP leadership under the fake Hyderabad conspiracy case, launching of a 5-year-long devastating military operation in Balochistan naturally caused utter disillusionment to the protagonists of the democratic experiment in the province. For Nawab Khair Bakhsh Marri, it was the last straw that broke the camel’s back.

“It is high time that the ruling establishment and the political leadership in Pakistan engaged themselves in some hard reflection and changed their decades-old mindset in dealing with Balochistan or for that matter with other constituent nationalities of the federation. The new young generation of Baloch nationalists are today up in arms against the way the state of Pakistan persists in jackbooting their national rights – the kidnapping, torture, forced disappearances, murders, dumping of bodies.
“We would like to draw the attention of our rulers to a few words of wisdom from late Mir Ghous Bakhsh Bizenjo, vide his Political Autobiography titled: In Search Of Solutions. Reminiscing on the debates he used to have in Hyderabad Central Jail with Nawab Khair Bakhsh Marri and other comrades who disagreed with his insistence on choosing the democratic path for achieving their national rights, Bizenjo says: ‘I have been frequently going to Punjab and trying to persuade the leaders of Punjab to read the writing on the wall. I have been pleading with them from every platform I have had access to, to join the struggle of the smaller nationalities for their legitimate rights; rather to assume the lead in winning the confidence of the smaller nationalities by acknowledging their rights without any reservation. However, the apathy shown by the ruling classes leads me to think that the position taken by Nawab Khair Bakhsh and other comrades, which I have been dismissing as manifestation of subjectivism, is perhaps not so. On the contrary, I tend to ask myself: Am I a victim of a flawed line of thinking?  Is it a sense of frustration that prevents me from correctly evaluating the reality-driven standpoint of my comrades? The intelligentsia and thinking segments of the smaller nationalities are finding it increasingly difficult to bear the burden of persistent denial and suppression of their rights by the dominant nationality by force of its sheer numerical majority and its predominant position in the bureaucracy and the armed forces. They argue that no one can or will tolerate a life of slavery for all times and I am beginning to agree with them’.

“Nawab Khair Bakhsh Marri has passed away. The new young generation of nationalists are up in arms. Are the power brokers in Pakistan ready to listen?” the message concludes. (Courtesy: Daily Times)

Republished in The Balochistan Point on June 13, 2014