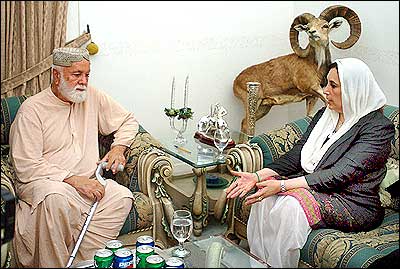 Veteran Baloch Marxist Nawab Khair Baksh Marri bowed out on Tuesday after protracted illness. He was 86.

Born in Kohlu in Balochistan on February 1928, Marri was the founding member of the erstwhile National Awami Party and inspired several generations of Baloch youth. He was equally revered by Sindhi nationalists. He was seen as the kingpin of the radical Baloch nationalist movement, which explicitly demands an independent Balochistan.

The veteran Baloch leader had been living a quiet life in Karachi’s posh Defence area for the past several years, but his admirers as well as rivals viewed him as one of the key players of the separatist movement, operating from behind-the-scenes.

He was a leader of the shadowy militant Balochistan Liberation Army (BLA) – which is waging a low-intensity insurgency in the rugged mountains of Balochistan, as well as targeting government installations, officials and security forces in the cities.

An enigma to many of his contemporaries, Marri was a key leader of the 1973-77 Baloch insurgency that saw an estimated 50,000 Baloch fighters taking up arms against the Pakistan Army. Thousands of people were killed in the insurgency, including hundreds of security personnel. The Marri tribe spearheaded the movement, which was supported by a handful of Pakistani leftists as well as by the now-defunct Soviet bloc. KB, as he was popularly known at the time, was languishing in prison during that entire period, along with several key leaders of the banned National Awami Party including Ghous Bakhsh Bizenjo and Ataullah Mengal under the Hyderabad conspiracy case. Once freed by former military dictator General Zia-ul-Haq, KB flew to Europe for a brief stop over and then went into self-imposed exile in Afghanistan, along with his tribesmen.

He returned to Pakistan in 1991, only after the Soviet-backed Kabul regime was close to collapse. He was briefly arrested on charges of being involved in Justice Nawaz Marri’s murder, but was released in 2002, following which he moved to Karachi. Ill-health and old age had removed him from the political scene, but he was still idolised by many Baloch nationalists.

His arrest during Musharraf’s tenure had fuelled anger among many of his tribesmen, who, once again, went on a confrontationist path. These included his son Balach, who was killed in 2007 in a controversial military operation.

Unlike conventional tribal and feudal politicians, who are fond of lengthy political arguments and discussions, KB was a man of few words. He spoke in a soft voice, but his one-liners were often filled with sarcasm, bitter wit and irony. He knew the art of answering a question with a question. From his calm body language and the gentle tone of his voice, he appeared to be a gentle person, but appearances are often deceptive. Old age, exile, arrest and personal losses had in no way mellowed him. He was still as uncompromising and unbending in his last days as he was in the 1970s. Until his death, he continued to chase his dream of an independent Balochistan, which had eluded him all his life.

I met with him in 1970 in Karachi when the late Dr Nayyar Aziz Masoodi hosted a dinner on the rooftop of his Azizabad residence.

The NAP had its central committee meeting in Karachi and we got the opportunity to meet luminaries such as KB, Sardar Ataullah Mengal, Mir Ghaus Baksh Bizenjo, Prof Muzaffar Ahmed and Col Lateef Afghani to name a few.

I was a student at the University of Karachi at that time and a central committee member of the left-wing National Students Federation (Kazmi group).

After a lapse of several decades, I met with KB again some five years ago when I interviewed him for The Sunday Indian at his Karachi residence. I was the Pakistan bureau chief of the TSI at that time and also a special correspondent, special projects-II at The News International.

The interview lasted for about one hour and KB spoke at length on the implications of use of drones by the Obama administration, the Taliban, the schism between the Baloch nationalist movement and the federation, the grievances of the Baloch youth etc.

Excerpts from the interview hold true even today:

Q: President Obama is considering covert operations in Balochistan against alleged Taliban and al-Qaeda sanctuaries. What will be the consequence if such an operation takes place?

A: I don’t know what will be the consequences. I can’t make predictions. I am not aware how the people who are vying to see Balochistan independent view Obama’s threat. Our homeland has become a turf of war. Baloch areas in Balochistan are already being bombed. We would not like drone attacks in Balochistan but we don’t have the capacity to stop these attacks if Obama goes for it. We are still engulfed in a war with the stooges of imperialism. I am not aware whether or not such attacks would take place with the collaboration of the Pakistan government. The situation is similar to the well known fable that an Arab gave some space to his camel and it occupied the entire tent.

Q: Is it true that there are Taliban sanctuaries in and around Quetta?

A: I don’t know. Even if I knew, I would not have talked about it. I don’t work for an intelligence agency.

Though a strong nationalist and a Marxist ideologically, Marri who differed with the Taliban made it clear that he would not identify Mullah Omar even if he knew about him.

The repression of the Baloch people since 1948 had made Marri bitter against the establishment, but he made it clear that it was mere disinformation that Baloch nationalists were killing Punjabi teachers and other poor people.

“Why will we kill poor Punjabis such as teachers or clerks,” he said. “They are not exploiting us. The vested interest is exploiting our natural and mineral resources,” he said.

After the conclusion of the interview he said in his soft and cultured voice: “Aap tu yahein key lagte hein? (You seem to be a resident of Karachi).”

I was amused. He thought I had come from Delhi to interview him. I said of course I was a resident of Karachi and reminded him that I had met with him in 1970 at a dinner hosted by NSF leader Nayyar Aziz Masoodi. (Courtesy: http://www.thenews.com.pk/)

Published in The Balochistan Point on June 13, 2014

2014-06-13
admin
Previous: Save the Children holds “Policy Dialogue” on Early Childhood Education
Next: A tribute to the late Nawab Khair Bakhsh Marri: Are the power brokers ready to listen?