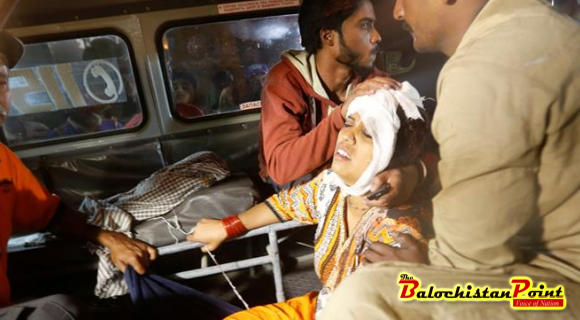 A few days ago, a renowned activist friend of mine who is in the US these days laughingly commented on Facebook that no suicide bomber would ever think of detonating in Lasbela, Balochistan because it is hot as hell there. No bomber is mad enough to kill himself in such scorching heat. Alas, he was proven wrong last Saturday when a young suicide bomber exploded himself at the Sufi shrine near Lasbela, killing around 60 people and injuring more than a hundred. Responsibility for the attack was claimed by ISIS. How I wish now that my friend was right. His words are still replaying in my head.

Just before this tragic incident, an American friend and I had been trying to re-activate a petition among Pakistani activists which asks that tolerance and comparative religion be taught in public schools rather than making only one religion (Islam) mandatory in public school curriculums. The petition came about in response to news reports last year that the Minister of State for Federal Education was proposing to make the teaching of Islam mandatory in all Pakistani public schools, which we feel would only perpetuate the intolerance that plagues the country and results in religious extremism and vigilante brutality. No one religion should be emphasized in public schools because of the way it can create feelings of superiority over others who hold different beliefs, and, conversely, feelings of inferiority among those of other faiths. Pakistan must take seriously how the minds of the young are shaped by what they see, hear and are taught if they want to change the fabric of a society where suspicion and violence now seems to lurk around every corner.

The petition I refer to merely asks the Federal Government to make compulsory the teaching of comparative religion in schools not merely one religion, along with a well-designed course and interdisciplinary emphasis on tolerance. The petition went out to hundreds and reached thousands through social media shares — including my activist friend, who agreed with its content but who still has not signed. He may have been busy, but it was not just him. Most who call themselves activists have not signed. To date, there are only 130 signatures on the petition. [https://community.avaaz.org/petitions/we-the-people-of-pakistan-2]

In Pakistan, radicalization and religious extremism are decades old. They have been nurtured through various means. School curriculums, textbooks, distorted history — a study conducted by the Pakistan-based NGO Peace and Education (PEF) found that “Pakistan’s public school textbooks negatively portray the country’s religious minorities, including Hindus, Christians and Ahmadis, as ‘untrustworthy, religiously inferior, and ideologically scheming.'” [http://www.cnsnews.com/news/article/lauretta-brown/] Even some political parties still promote the element of hate while dividing people by religions and religious sects.

Compared to other provinces, Balochistan has been far removed from religious extremism. There the Hindu, Shia and Zikri (a group of Baloch people who believe that Mahdi will come back as a Prophet before end of the world) used to live in harmony without prejudice and hatred. Even the Sunni-Baloch and the Zikri-Baloch, despite different religious beliefs, would often intermarry. One can find among the Baloch that one brother is a Zikri, the other is Sunni. Religion has never been a cause for worry among the Baloch, and Balochistan has always objected to having been unwillingly pulled (because of its rich mineral resources) into the federation known to the world as Pakistan and now declared an Islamic Republic. There are still those who yearn for independence from Pakistan so that Balochistan can have its own secular government and benefit from the richness of its own resources instead of having to have them siphoned off by the eastern provinces of Pakistan.

After studying and spending more than four years in Pakistan’s capital, Islamabad, I have been in touch with a considerable circle of Pakistani activists, including many from other provinces. They are all aware of the menace of radicalization and religious extremism, and are against religious intolerance. But the problem I have found with most of them is that they are more protesting activists than solution-seeking activists. That is not to say there are no solution-seeking activists in Pakistan. On the contrary – Dr. Fouzia Saeed (women’s rights activist and Executive Director ofLokVirsa), I.A.Rehman (human rights activist), and Civic-Educationist Zafar Ullah Khan(Executive Director of the Pakistan Institute for Parliamentary Services) are just three that I am proud to call my mentors. What I mean to say is that the younger generation and a great many who call themselves activists seem to see protest gatherings or social-media condemnation as the only options open to them in Pakistan.Let’s say that the news breaks of two Ahmedishaving been attacked and killed. You will soon find a group of activists protesting in front of the Islamabad Press Club. But after 48 hours, everyone will forget what happened. Does the story end there? No. It keeps repeating itself with each new killing or injustice reported.

The unfortunate follow-up to incidents that happen in Balochistan, though, is that most of the time they fail to incite activists to gather in front of the Islamabad Press Club. It is not that they do not protest, but instead they do it on Facebook or on Twitter, which rarely can be witnessed. Media activists also seem to neglect carnage in Balochistan, which only keeps being repeated. For instance, at the Police Training Academy in Quetta, 62 young recruits were killed but the media was more focused on PTI party leader Imran Khan’s drama.

Religious extremism has caused the deaths of more than 200 people in Balochistan in the last four months, and left more than 300 injured. It is the high time activists all over Pakistan change their mode of activism from protest to solution-seeking. What about starting a bona fide movement or petition to amend the clause of the Pakistani Constitution that declares Ahmedis non-Muslims? Why not initiate a movement in Punjab or Sindh to stop the media blackout of Balochistan?

And for all who happen to read this all the way to the end – activist or otherwise –I will mention the petition again… because it’s important.I have signed it. I urge you to sign it. It only takes a minute.
https://community.avaaz.org/petitions/we-the-people-of-pakistan-2

Originally published in THE EXPRESS TRIBUNE BLOGS under the title “The Noorani attack proves Pakistan will continue being religiously intolerant” (title changed by editorial staff).

Shah Meer Baloch is a freelance writer and fellow of the Swedish Institute/SI, Stockholm (Sweden) and the Institute for Foreign and Cultural Relations (InstitutfürAuslandsbeziehungen/IFA), Stuttgart (Germany).

Published in The Balochistan Point on November 17, 2016