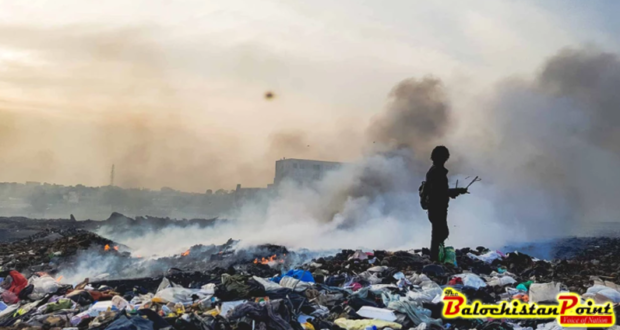 The report: “The State of Global Air 2019” ranks Pakistan as fifth country with fatal effects of Air pollution. Health and environmental experts’ term air pollution as emerging public health emergency in world and in Pakistan. Air pollution has been named as one of the leading cause of deaths in Pakistan with death toll reported to be 59,000 people every year.  Various reasons cause air pollution in country; however, solid moves and policies can be tangible measures to cope with the issue.

According to US-based Health Effects Institute and University of British Colombia report, ” The State of Global Air’ states: “Air pollution is the fifth leading cause of early death world-wide responsible for more death than malaria, road accidents, or alcohol.”  The mentioned report puts Pakistan among top 5 countries with highest mortality rate due to pollution. Shockingly, the top five countries with the highest mortality rate due to air pollution were all in Asia: China, India, Pakistan, Indonesia and Bangladesh.

Similarly, the available statistics of WHO reveals that 9 out of 10 individuals die every year owing to high level of pollutants, like black carbon which penetrates deep into lungs and cardiovascular system. These pollutants then cause pneumonia, sever respiratory infections and heart diseases.

In addition, there are a large number of affecting contributors to toxic air which put Pakistan at fourth position with considerable human health hazards. One of the chief reasons to air pollution includes large scale industries which burn fossil fuels as source of energy. Apart from it, a number of small and large scale factories use furnace oil having higher sulfur contents, these include power plants, cement, and sugar and fertilizer industries. Waste recycle plants, bricks kiln are also add to releasing contaminants.

Among the main causes of air pollution, burning of solid waste is another issue. Because more than 55,000 tonnes of solid waste is produced on daily basis in Pakistan. Thus, burning of solid waste results emitting of toxic gases such as carbon monoxide and some other poisonous gases. Similarly, in the last two decades a huge increase has also been observed in the growing number of vehicles in Pakistan. Moreover, the massive traffic is massively contributing element to the air pollution in Pakistan. As carbon dioxide and carbon monoxide are the greenhouse gases which are contributing to the global warming.

Different studies and experts expect serious impacts on Pakistan’s papulation by 2030. According to the Pakistan Environmental Protection Agency (PAK-EPA) air pollution levels for the major Pakistani cities have been recorded seven times higher than those quoted by WHO. However, complete implementation of environmental policies and laws as well as enforcement of national environmental quality standard can be a productive measure to cope with the discussed burning issue.

Finally, the air pollution can easily be confronted if the aforementioned measures are taken, such as (a) creatinine awareness on air pollution along with afforestation and plantation in urban areas can improve environment to fight toxic air. (b) Proper maintenance of machineries, vehicles and traffic free transportation can be effective measure to reduce impacts of air pollution. (c) Promotion of new technology in the industry can be tangible to reduce use of chemicals or smoke from industry which increase air pollution. (d) Developing public transportation system, control of burning solid waste and provision of pollution free fire at domestic and commercial level. Indeed, can assist   to overcome alarming situation of air pollution in Pakistan.

Published in The Balochistan Point on July 25, 2019

2019-07-25
admin
Previous: Books: Key to change in society
Next: Lyari Literary Forum: An upright support for a superstructure