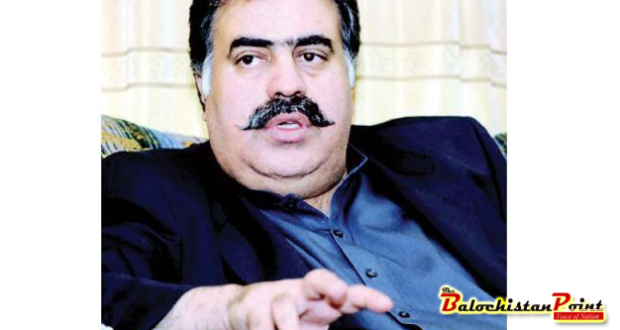 All Available Resources Will Be Utilized to Address Water Crisis in Balochistan: Nawab Sanaullah Khan Zehri

Quetta: Chief Minister Balochistan, Nawab Sanaullah Khan Zehri has said that all available resources would be utilized and tough decisions would be taken In order to address the water crisis in Balochistan.

Chief Minister Balochistan  out-rightly stated that government would not hesitate to take hard decisions for establishing its writ improve the performance of government departments.

Chief Minister was addressing to the concluding session of two day-long seminar on “Water crisis in Quetta/Balochistan and way forward,” organized by Public Health Engineer with collaboration of Southern Command here at a local hotel on Thursday.

Nawab Sanaullah Zehri said that he was well- aware of  water crisis in Balochistan particularly in Quetta. “We had plenty of water reservoirs, fountains and water channels but after incessant pumping of ground water the water table has dropped to an alarming level,” he said.

He said that water crisis has affected the entire province taking from Panjgour to Zhob, adding that without water no civilization could develop. “Now it is our responsibility how to recharge our water reservoirs,” he said.

Chief Minister expressed his annoyance that officials in government departments were not properly discharging their duties as doctors, teachers and other officials prefer to stay in Quetta instead of serving in remote areas.

“We would take tough decisions to ensure smooth running of government departments so that the issues of masses could be resolved on priority bases,” he said.

Citing Punjab province, Nawab Sanaullah Zehri said, “it takes months to get NOC for digging a tube-well in Punjab but in Balochistan in many areas you would witness countless tube-wells with a distance of only 20 feet. “We need legislation in this connection,” he added.

He said that for addressing the water crisis in the province we would have to take unpopular decisions for the future of our coming generations without hesitating that people would not vote in elections.

Referring to provision of water to Quetta city from Indus river, Chief Minister said that if Murree could be provided water from Jehlum why not Quetta from Indus. However, he said that there are other options available like constructing dams in Bolan that would also help wastage of flood water.

He said that God has gifted Balochistan with natural resources and four weathers, adding that it is responsibility of all of us to play our duty with sincerity to develop our province.

He said that in Saudi Arab and other UAE countries water has remained an issue as they had established desalination plants, adding that we have this option to set up desalination plants in coastal areas to address the water issue.

Federal Minister for States and Frontier Regions. Lt.Gen (R) Abdul Qadir Baloch said that in order to improve the performance of departments government had to establish its writ. He said that bureaucracy after having political support could better discharge its duty.

Terming water situation of Balochistan as dangerous, he emphasized upon the need of creating awareness about proper utilization of water among masses and farmers. “We should prefer drip irrigation system for agriculture instead of flood irrigation that would help increase production and save water,” he added.

Chief Secretary Balochistan Saifullah Chattah said that nonstop pumping of ground water had reduced water reservoirs of the province and stressed upon proper use of water.

He said that provincial and federal governments were giving Rs 22 billion of subsidy annually to agri-tubewells that has further increased the usage of ground water.

He said that for the improving the water situation federal government and international donors have assured provision of support, adding that after implementing the recommendations of the seminar the water situation would further improve in the province.

The seminar was also addressed by water and agriculture experts, and people hailing from different departments and segment of life attended the seminar.

Published in The Balochistan Point on March 17, 2016

2016-03-18
admin
Previous: Everybody Should Play Vital Role to End Cheating Culture: Chairman Balochistan Board of Intermediate
Next: Protest Camps Set up for the Safe Release of Zahid Baloch