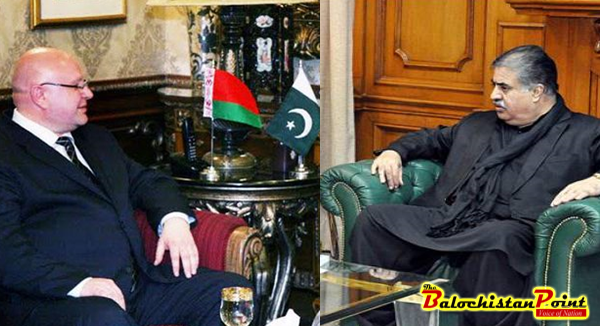 Quetta: Belarus has shown great interest in making investment in various sectors of Balochistan, setting up a joint venture with Balochistan in preparing heavy machinery used in agriculture and mining sectors. It has also expressed interest to establish a vocational training institute to impart technical training to Baloch youth.

In the meeting both sides exchanged views regarding opportunities of investment in different sectors of Balochistan and promotion of mutual cooperation.

Chief Minister said that Balochistan is significantly rich in mineral resources and government wants to utilize the resources of Rekodiq and others in a transparent way for the wellbeing of masses. Thus, he said achieving this goal government is encouraging foreign investment and welcomes the support of friends’ countries in this connection.

“Balochistan has abundant of reserves of gold, copper, iron, marble and many other valuable minerals. The investors can make profitable investment in these sectors,” he told Belarus envoy.

Nawab Zehri said that Gwadar is the future of Pakistan which is going to become the hub of trade and industry, and it is the base of CPEC project.

Showing interest in tapping from the heavy machine making industry of Belarus, he said that the province needs heavy machinery for agriculture and mining sectors as it has wide rugged train.

Referring to tractors made by Belarus, Nawab Zehri said that these tractors are greatly famous in Balochistan and the farmers widely use such tractors.

Ambassador of Belarus Mr. Andrei G. Ermolovich offered Balochistan government for preparation of heavy machinery after setting up a joint venture and said he would either produce recommendations to his government in this regard.

Showing interest in marble and other mineral resources, agri and marine products, he said that they would review to import these products from Balochistan. “Recently president of Belarus visited Pakistan, and during the visit both countries had showed willingness to increase the volume of business to $ 1 billion by 2020 besides increasing regional cooperation,” he added.

Mr. Andrei G. Ermolovich said that a delegation led by governor of Brest province of Belarus accompanied with investors and traders would soon visit Balochistan.

Terming CPEC an important project, he said that making youth of Balochistan skillful Belarus would establish a vocational training centre in the province.

Published in The Balochistan Point on October 20, 2016