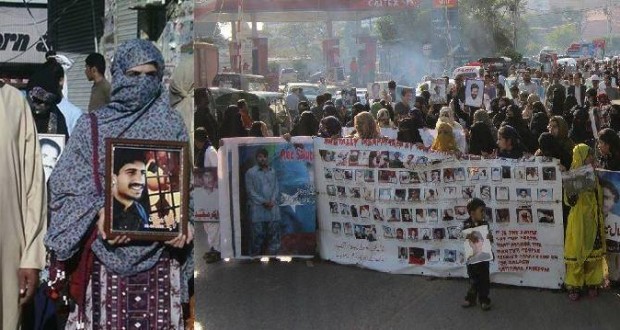 An Immortalizing March in Baloch History

An influential attempt for the nation’s abducted missing people’s recovery, commencing in October from Quetta finally reached Karachi in the last week of November. The extensively exhausting journey of 756 kilometers by fathers, mothers, sisters, brothers, daughters and sons of the either missing or martyred Balochs holding the photos of their loved ones, walking constantly with blistered and swollen feet in seek of justice, kept on moving on their way to Karachi.

The peaceful and civilized demonstration along with people of different ages generates painful chronicles hidden behind each participant. Mama Qadeer, Farzana Baloch, Sammi Baloch, Bibi Gul, Samina Baloch, Ali Haider Baloch only ten and noticeably hundreds of other Baloch families suffering with heart-wrenching stories, where as many of them waiting or mourning for their loved ones. Their sorrows obliged them to take the initiative to be a part of the marching rally. These are the same people who have sat in the hunger-strikes numerous times in front of the high court and the Supreme Court struggling from four years seeking for the peaceful recovery of their loved ones but their voice was still unheard or ignored. According to the participants of the Long March by Voice for Baloch Missing Persons, the trusts over the national media and institutes have ended and they only want to appreciate BBC and Vsh news for their coverage.

“We decided this Long March for the attention of International Community. United Nations Organization should take notice of on-going human rights violations in Balochistan” said a participant. Leading the convention and addressing to the 20,000 people according to Vsh news in Karachi, Mama Qadeer the father of slain Jaleel Reqi said “The struggle has not ended here. We will march to UN headquarters or find some other peaceful but affective way to continue to raise our voice.”

Abductions of 18,000 people from different areas across Balochistan, along with 1500 abducted men have been killed under-custody and their bodies have been dumped in different areas of Balochistan and Karachi. Mama Qadeer Baloch added: “Most of the victims of target killing were highly conscious and educated members of Baloch society including lawyers, doctors, students, poets, university lecturers, teachers and other professional people.

Full of hardships, but with strong will, they marched with obsession committing to continue the struggle. Gaining overwhelming momentum, the Long March finally reached Karachi where more people joined the march. The march which began with a few people was followed by hundreds and the participants were warmly welcomed by thousands of people. Apart from Baloch activists a great number of Sindhi and other human rights and political activists also come to support the march.

Having importance, this march is a symbol of the injustice going on from decades and shows that certainly something is bothering the province today. On the other hand governor of Balochistan Mohammed Khan Achqzai declares that everything in the province is going well. Without a doubt, we can assume how well-informed our governor is. On the other hand, Dr Malik named it a “seasonal march” while it’s an unforgettable historical march of Baloch nation.

The abhorrent silence over the issue will not keep this matter in dark any longer. The sacrifices and efforts of the participants will remain everlastingly. Categorically this march possesses immense significance not only for Baloch nation but for all those people who stipulate humanity and are anti human right violation.

Published in The Balochistan Point on December 4, 2013

2013-12-04
admin
Previous: Save our Children
Next: Municipality Elections in Gwadar