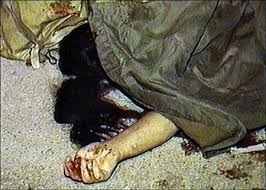 Armed men axe a woman to death in Kachi district

QUETTA: Armed men killed a woman in Tehsil Dhadar of the Kachi district on Friday.

According to the reports, unknown men attacked a woman with axes in Dhadar and fled the scene after killing her brutally.

Police reached the crime scene on being informed and took the body into its custody.

The body was later handed over to the legal heirs. Cause of the killing could not be ascertained as yet.