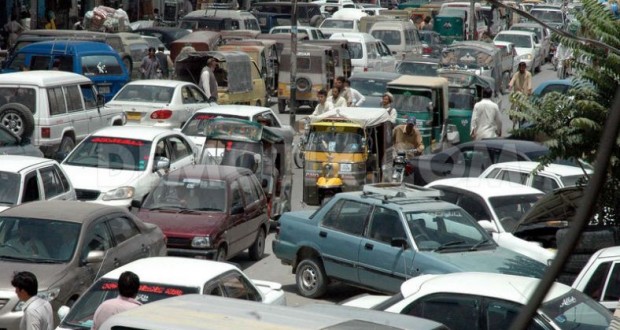 Traffic Problems in Quetta and some Solutions

Quetta was designed as a small city by British in late 19th Century. Quetta was designed to cater to the needs of 100,000 people only.  In 1951 its population was 199,735 and according to estimates the population of Quetta was 1.3 million in 2012. Quetta is the only major urban city in entire Balochistan. People from every nook and corner of Balochistan shift to Quetta because better educational and health facilities are available there. Quetta is facing diverse range of challenging issues and the most prominent one is the administrative failure of the government machinery of Quetta administration.

Apart from the urbanization and shifting of people from all over Balochistan to Quetta, the influx of Afghan refugees has also caused increase in population of provincial capital. Apart from environmental problems the roads of the Quetta have become congested with traffic due to poor traffic planning and management. The presence of private hospitals on busy roads has made it very difficult for drivers and pedestrians to reach their destinations on time. Quetta possibly has the slowest traffic movement rate when compared to other major cities of Pakistan. Quetta is among those cities where citizens have to waste maximum time during traffic movements.

Apart from substantial increase in population and negligence of government departments, there is another issue of security measurement steps taken by law enforcement agencies to ensure the security of city. The security arrangements have made the roads more congested then they already were. The jail break incidents in Bannu and D.I Khan have turned the Huda Jail, Central Jail of Quetta, highly sensitive and therefore the adjacent roads are often blocked for its security. This adds to the traffic problems of the city. Similarly, Frontier Corp (FC) headquarter located on Hali Road is also a highly sensitive installation. Hali road, from Model town end, is permanently blocked for security of FC Headquarter. No doubt tight security is essential for these places, but these steps are permanent Course of trouble for the residents.  Each day extra steps taken by law enforcement agencies brings more trouble to people.

Furthermore, VIP movement on Zarghoon road causes more delays to traffic system. All important buildings of Provinces are located on Zarghoon Road and when a VIP travels from these buildings to airport then Zarghoon Road experiences traffic blockages. Seeing the attitude of responsible official departments, it seems that they have decided to live with these problems and never give relief to people who are already suffering lots of miseries due to lawlessness, and probably the only unfortunate province where we have never heard about any mega development project which is enough to understand what are the preferences of officials.

There are possible economical ways which could bring a long lasting relief to the residents of Quetta. Government has to allocate a substantial amount of budget to shift these places out of the city to tackles the traffic problems created by the location of these extra sensitive government installations. Shifting Huda Central Jail out of city will not only minimize the risk of terrorist attacks but it will also provide an opportunity inside the city for government to convert these places into business centers to create employment opportunities. FC headquarters, if possible, ought to be shifted to Cantt area which is much more secure for officials and neither civil and nor military institution needs to spend additional amount for strengthening the security of FC headquarters. Second option should be to shift it to a remote area in outskirts of Quetta provided that there are no human settlements in its proximity.

Government of Balochistan will certainly lose a huge sum of budget in construction and shifting phase of these installations. After these Installations have been shifted then Business centers can be created in their place. The business centers will not only result in generation of employment opportunities but it will also result in revenue collection for the government. These steps if taken can bring substantial relief to the traffic situation and security of the Quetta.

The Author is a student of B.Sc Economics (Hon) from Forman Christian College Lahore.

Disclaimer: The views expressed in this article are those of the author, The Balochistan Point not necessarily agrees with them.