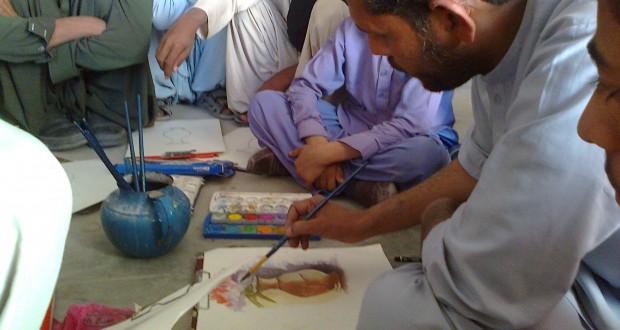 Art material and other stuff were provided by Directorate of Culture for the workshop and a large number of students participated in the workshop to exhibit their talent.

The exhibition of paintings made by school students were placed for exhibition in the hall of Government School and a large number of people turned up to witness painting exhibition.

During the exhibition visitors highly admired the students for their outstanding paintings.

Chief Guest of the event, Headmaster of Government High School Koshk, Muhammad Azam praised the students for their marvelous paintings and said students of remote areas of Balochistan are blessed with talent and are competent.

He thanked Mr. Abdullah Baloch director Directorate of Culture Balochistan and Assistant Director Khuda-e-Rahim for their efforts and organizing such a successful workshop.