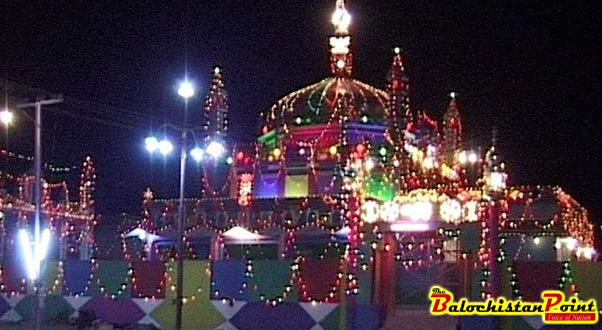 At least 18 Killed, 30 Injured in Suicide Attack in Jhal Magsi

QUETTA: At least 18 people were killed and 30 injured in a ‘suicide’ explosion in Balochistan’s Jhal Magsi district on Thursday.

According to the sources suicide attacker blew himself up outside a Sufi shrine in Fatehpur as Urs celebrations were underway.

“A suicide bomber blew himself up after he was intercepted by police guards on duty outside the shrine, killing 18 people including three children under the age of 12 and two policemen, and wounding at least 27 others, 14 of them seriously,” provincial home secretary Akbar Harifal told AFP.

Harifal said the seriously injured patients were being airlifted to southern Sindh province in the absence of adequate medical facilities in Balochistan.

Balochistan government spokesperson Anwarul Haq Kakar told media that It was a suicide blast and a police constable was also killed in the blast,adding that the constable was killed while attempting to stop the suicide bomber from entering the shrine.

Provincial home minister Sarfaraz Bugti also confirmed the toll. There was no immediate claim of responsibility
The incident follows a deadly bomb attack on the same shrine in 2005, which killed 35 people.

Published in The Balochistan Point on October 5, 2017

2017-10-05
admin
Previous: Balochistan Towards Warfare or Welfare
Next: Water Crisis in Balochistan