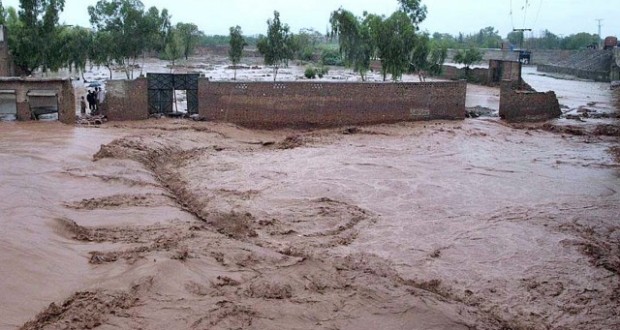 Balochistan: The rainwater has flooded over 50 villages in District Jhal Magsi of Balochistan province while stormy flood waves have breached many dikes of River Maula in Jhal Magsi and Khuzdar.

In Balochistan, Jhal Magsi is bracing for a huge hill torrent from the mountainous Jhalawan area. Officials fear the torrent carrying around 250,000 cusecs of water might wash away many more homes and destroy acres of farmland in the district.

At least 18 people – mostly women and children – have been killed in rain-related incidents in the province over the past 48 hours.

Many mud houses have collapsed and many more have been endangered by the floodwater; local residents are waiting helplessly for relief and rescue from the provincial regime. The District Administration have moved heavy earth moving machinery in the flood hit area but vastly spread flood water will take some time in draining out

Moreover, In Sibi, a high-level flood was passing through River Narhi while an emergency cell has been established at the office of commissioner. Low-lying areas of Jhal Magsi were also submerged.
Authorities also ordered evacuation in the historical city of Gandawah and people were asked to move to safer areas. A flood was also expected to hit Saifabad, Kot Magsi, Misri Goth and adjoining areas. Khuzdar-Shahdadkot road, the main artery linking central Balochistan and upper Sindh, was closed after a land sliding in Wangu region.
The Met Office said the prevailing monsoon system wan heading Sindh from Balochistan and torrential rains are expected in Gwadar, Jiwani, Turbat and adjoining areas.

The incessant rains in Jhalawan, in central Balochistan, have caused flooding in all seasonal rivers. The surging waters submerged settlements and villages on the banks of these rivers, damaging infrastructures and destroying properties.

Khuzdar, the second biggest city of Balochistan, and Karakh, Nal and Zehri areas have been badly affected. Central Balochistan was cut off from upper Sindh after the Khuzdar-Shahdad Kot highway was blocked due to landslide.

Published in the Balochistan Point on August 5, 2013