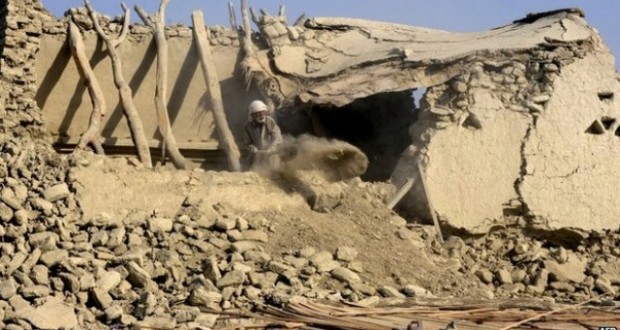 Narratives and pretexts aside, we know one thing for sure: The earthquake victims in Balochistan’s Awaran District still await full assistance. The earthquake measuring 7.7 hit several districts of the province, particularly Awaran, which happens to be the hub of the ongoing Baloch nationalist insurgency. Dr. Allah Nazar, the commander of the underground Baloch Liberation Front (B.L.F.), belongs to the same district where he has been resisting Pakistani military’s unlawful and extrajudicial actions in the recent past. Dr. Nazar calls for a free Balochistan and enjoys tremendous influence and public support in the area, mainly among the Baloch youth.

The local population also resents the army because some accuse it of burning people’s houses  during search operations some months ago. But now, paradoxically, all eyes are focused on the army to help the quake victims. Because the army possesses the manpower, the required helicopters and the necessary hardware that is needed to grapple with a natural disaster like this one.

Following two unsuccessful attacks on a helicopter carrying senior government officials, the Balochistan government blames Baloch nationalists for creating hurdles in its efforts to dispatch immediate assistance. The quake victims do not buy the official excuse as they insist that the government has wasted too much time and still failed to reach all areas that have been hit by the quake. By blaming the nationalists, they say, the government is hiding its own failures.

When a member of the Balochistan Assembly proudly stated on Vsh News that Chief Minister Dr. Malik Baloch had winded up his London tour to return to Balochistan, a news anchor contested his claim saying that the people would be impressed by the chief minister only if he had returned to his home province soon after the tragedy instead of four days later.

Awaran is caught up in a very dire situation where massive assistance is needed but two important players in the area, the government and the Baloch armed fighters, do not trust each other nor do they cooperate with each other. More injured people will die and hungry women and children will perish if timely and adequate assistance does not reach them.

There is a growing demand among the Baloch nationalists and the local media that considering Islamabad’s history of mistreating the Baloch, only international organizations should be allowed to provide assistance to the victims. This is a wishful demand which is very unlikely to be accepted by Islamabad. As a result, further delay will deepen people’s miseries.  Any attacks or even rumors of security issues will prevent and discourage the army, national and  international non-government organizations leading to disruption of whatever relief work that is currently taking place.  Most international organizations do not work in places where they smell any kind of physical threat to their staff members.  The situation in Balochistan has been so chaotic that even a gallant organization like the International Committee of Red Cross (I.C.R.C.) has often ‘reduced‘ their operations in the province.

This is indeed not the time for settling political scores. The Pakistan Army and the Baloch Liberation Front should immediately and unconditionally announce a ceasefire in Awaran in the greatest interest of the suffering people. (Courtesy:  The Baloch Hal)