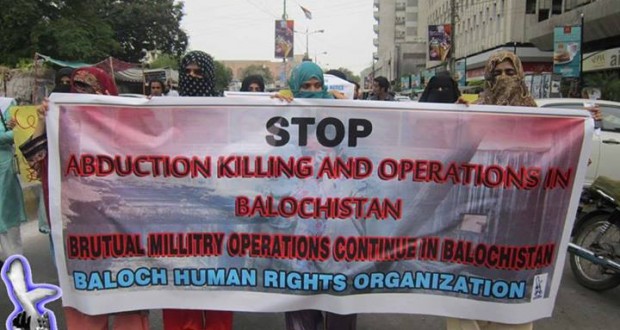 The women activists of B.H.R.O were holding banners and play cards inscribed with appeals to stop human rights violation in Balochistan. Addressing the participants the speakers termed human rights volition on rise in Balochistan and described a deteriorated situation. They said that forces’ operation in Baloch areas, enforced disappearance   and “kill and dump” of Baloch youth were at that moment continued.

“Since the last month in Mastung,Isplenji,Kabo and Talkhawi  areas of Balochistan , some 65 innocent Baloch have been forcefully disappeared and the people are  are compelled to migrate the area.” Informed the demonstrators

They demanded International communities to ply their due role to stop human rights violation in Balochistan.

Published in The Balochistan Point on July 7, 2013

2013-07-07
admin
Previous: Chaghai: Agriculture on the verge of collapse
Next: “The innocent victims of Lyari”