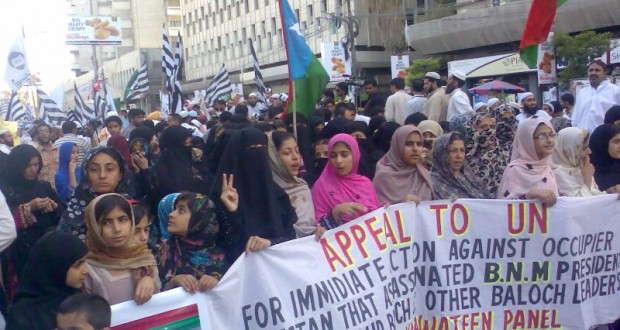 Baloch and Hazara: Under the weight of a sad time.

If the air is filled with cries; the wind with the smell of blood loaded; tears the field of graveyards water; mountains wear a sad look, then you should know  that  you are  nowhere but in Balochistan: the land of cries, Balochistan, where Baloch nation and Hazaras are systematically being prosecuted.

There is great injustice and unnecessary tyranny in this part of the universe. Two nations, Baloch and Shia-Hazaras are constantly under the gun. Both are victims of persecution and violence, but for totally unrelated reasons.

The former, however, are brutally abducted in daylight, forcibly disappeared and extra-judicially killed owing to their demand for ownership of their land and resources , while the later, are subjected to outrageous cruelty, in violation of the constitution of Pakistan, for following their respective faith. The banned Lashkar-e-Jhangvi, claimses responsibility of killing them and describes them Wajib-ul-Qatl (deserving of death) in media. Allegedly, death- orders, both of these nations , rise from Punjab, which is a blame for moderate Punjab and Punjabis.

The ongoing revisited resistance movement in Balochistan is  result of a stunning act of
violence and extra-judicial killing: the brutal murder of Nawab Bugti, a veteran Baloch Chieftan and a pro-Pakistan politician. It forced the young Baloch to think about their future in Pakistan. Eventually,  convincing them to pick up arms against state’s atrocities for the fifth time. Furthermore, A prominent   Baloch writer Mir Mohammad Ali Talpur Writes in one of his articles  published in Daily Times : ‘’Since 1948, the Baloch had been fighting against the illegal occupation of their motherland, every time the precisely vicious Pakistani-state brutally put them down.”

As, the establishmen , in distant past,  used to stand sardars responsible for all the troubles in the province which is an  old tactic, to distract attention. But, for now, such a flawed narrative has almost ceased to work. People hardly believe it. Now the establishment has earned rage enough of a widely aware public and human rights’ champions.  So,  no longer easy to suffocate the genuine voice of the Baloch.

Furthermore, it has become ever clearer in recent years that the revolting voices are of the common Baloch people. Not of the Sardars. And that these people are chided by simmering injustice, that has become another profound hurdle.

Admit it. The situation is gruesome and life severely disrupted in the Province. The Baloch, who oft scorns danger, is fearlessly out like Hector, to face an approaching, furious and ferocious Achilles. Seemingly, to protect his people and the sad mountains of Balochistan, that clearly resembles the walls of Troy. What dire consequences would be, better a Baloch homer will chronicle.

On the other hand, the Hazara-people are also under the weight of a sad time. Except,  a glooming peace, the moments of supreme joy reside no more in the clean and clear streets of Marri-Abad and Hazara-town. The barrels of the guns of Sipah-e-Sahaba and Lashkar-e-Jhangvi devoured more than 2,000 Hazara men, women and innocent children put to death for uncommitted crimes

Here, the attitude of establishment towards Baloch becomes vivid, when we seen continued atrocities and systematic killings of of Baloch people. Similarly, the agencies are so advancing that in every few months, they kill Baloch in a new way while protect the likes of Hafiz Saeed and Malik Ishaq.  Remember, the former is the subject of an InterPol Red Notice and  on the orders of the later, the Shia-Hazaras are butchered in Quetta. Owing to this, a great number of people consider the top agency, nothing, but a hideous scar on the face of a 66-year old Pakistan. However, such a biased practice made secret agencies like American-CIA, in the eyes of an aware public, nothing but an agency of propaganda.

The sky is covered. The threatening black clouds can erupt into rainstorms of blood and devastation anytime.

It is time the people of Pakistan don’t act carelessly; however, as responsible citizens, they also keep a close eye on whether their government with its agencies is doing the right thing.

Niaz Betab  is a Baloch writer and studies English Literature at Numl.

Published in The Balochistan Point on August 15, 2013