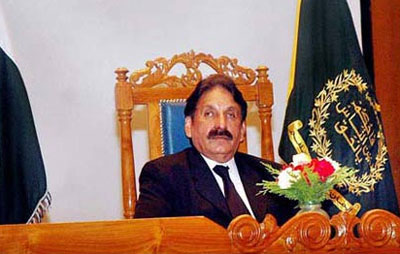 Islamabad: Chief Justice Iftikhar Muhammad Chaudhry said the court’s order for recovery of missing persons was not being followed in Balochistan unrest case whereas there was substantial evidence against Frontier Corps (FC) personnel.

Earlier last week, Pakistan’s top judge had taken suo-motu  notice of the unrest in Balochistan after at least 60 people lost their lives in separate incidents of violence within a week.

A two-member bench of the apex court today heard the case at the Supreme Court’s Quetta registry.

Meanwhile, chief justice Iftikhar expressed displeasure over the non-recovery of missing persons, adding that their (missing persons) families had been setting up camps outside Quetta Press Club since the past four years.

The chief justice also took notice of the broadcasting of a video, which showed footage of the Quaid-i-Azam residency in Ziarat, after militants attacked it with hand grenades  on June 15 and said it was against the laws and Constitution.

Published In The Balochistan Point on August 15, 2013

2013-08-15
admin
Previous: The Unseen Enemy
Next: Baloch and Hazara: Under the weight of a sad time.