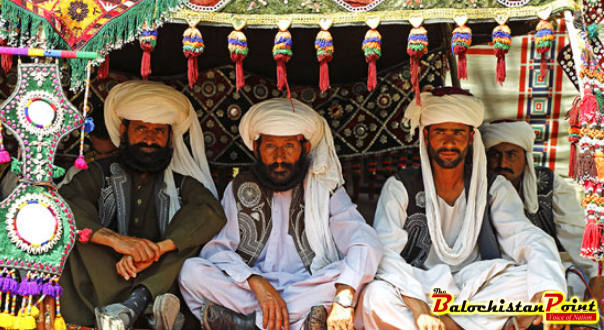 Baloch and Their Culture

The word Baloch, by its connotation is meant nomad. Over 75 percent of the Baloch live in Balochistan .Apart from Balochistanl, Baloch also reside in other provinces of Pakistan. Moreover, about the origin of the world ‘Baloch’, Rawlinson (1873) estimated that the word ‘BALOCH’ came from the name of Babylonian king and god blues. Similarly,Dames (1904) explains that it is derived from the Persian language in the 6th century. Naseer Dashti (2012) believes that the word ‘Baloch’ has been derived from the name of ethnic group Balaschik living in Balochistan.

According to some estimates that the population of Baloch is around 2.5 million worldwide, however it is difficult to estimate the exact number but they make 5 percent of Pakistan’s population. According to some people many Baloch are said to be migrated to Balochistan from Aleppo (syria) in the 12th century.

In Baloch culture marriages are more different and unique than in the other provinces of the country. The marriages are according to Islam. Every member of family takes part in marriage; they express their joy and happiness by following the traditions of their culture. Usually the marriages are done in young ages (teenage) but are arranged in early childhood or at birth. In some tribes there is a tradition of takings ‘valver”it is a sum of money paid by the groom to the family of the bride

Certainly, like all other provinces of Pakistan the national dress Shalwar Kameez with distinct additions and modifications are dressed in Baloch culture. Furthermore, the people dress up very pleasingly and in the same way in all the tribes. Turban is the common headwear of Baloch men long with wide loose Shalwar long with knee-long shirts. Also female dress consists of a shirt having a big pocket and embroidery and embedded round mirror work in front. Baloch culture is rich in folk music dances and songs. Famous wedding songs of Baloch culture are ‘Nazenk, Salonk and so many.

Usually Baloch people have meals in morning and evening men and women eat separately. such as, wheat, rice and millet also in important dish of Baloch. There are many foods for Baloch which they like very much.

Published in The Balochistan Point on November 7, 2017