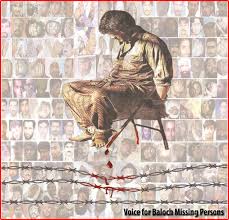 Prior to, the election of 2013, incumbent Prime Minister made lofty claims of resolving the Balochistan issue. Recovery of missing people of Balochistan was in top of his priority list. N-league was the single largest party of Balochistan, as it won 14 seats, but instead of forming its own government in Balochistan, Nawaz Sharif invited a Nationalistic Party to make its government. As a result, Dr.Malik Baloch became the first non-feudal Chief Minister of Balochistan. This step of Nawaz Sharif was a prudent one because; Dr.Malik Baloch is an educated, wise and hails from a middle class family. This benevolence of Prime Minister of the state generated a ray of hope in the heart of depressed Baloch nation.

Immediately, after taking the oath as a CM, Mr.Baloch perspicuously said, missing person case is a chief hindrance in straightening out the Balochistan insurgency. He vehemently said, unless or until, missing persons are not brought to the court, the chaotic state of affairs in Balochistan will continue to deteriorate. Unfortunately, the judicious utterance of Mr.Baloch was like crying in the wilderness. The authority concern paid no heed to remarks of the Chief Minister and still bullet riddle mutilated bodies are thrown on the roads on daily basis. Moreover, during the PPP regime, Damage bodies were found in the premises of Balochistan only, but now this malevolent practice has been extended to Karachi as well. CM of Balochistan has candidly admitted that he has failed to settle the issue of missing persons.

Ironically, the mantle played by Prime Minister in solving this grave matter is far from satisfactory. As a minister of defense, he was summoned by Supreme Court in the case of missing persons. The rejoinder of the leader of the nation was pathetic .Overnight, he resigned from his portfolio and entrusted the responsibility of defense ministry to Khwaja Asif. It seems that it is against the dignity of three times Prime Minister of Pakistan, Head of the largest party of Pakistan, heir apparent of Takht e Lahore, to summon himself in front of Supreme Court. It is said old habit die hard, hitherto, in 1997, he was ordered by then Chief Justice to come to Supreme Court, the result was that the infuriated workers of PMLN attacked the Supreme Court. Mr.Sharif hasn’t learnt anything from his past follies and he is yet not willing to abide the orders of Supreme Court.

This attitude of Nawaz Sharif is condemnable. He should have gone to the Supreme Court and his presence in Supreme would have enhanced his own reputation and would have further strengthened the democratic system. It would have provided hope to the upright Baloch hoi polloi, who have lost faith from the government of Pakistan. Mr.Sharif should have fully availed this tremendous opportunity and his sincere efforts could have won many hearts and mind not only in Balochistan, but in the entire Country. It was a blessing in disguise for him, but unfortunately he didn’t fathom out it. On the other hand, former President Yousaf Raza Gilani appeared before the Supreme Court not once but thrice and was dismissed from his office by the orders of the Court. Despite the bad governance of Mr.Gilani, his deference to the Court should be acclaimed. He might have lost his portfolio, but his lethargic conduct has earned for him a feather in his cap. Whereas, reluctance of Nawaz Sharif has exposed his dearth of states man ship capabilities.

This act of the honorable Prime Minster will have dire repercussions. Firstly, it will augment the sense of deprivation in the Baloch masses and they will contemplate that Mr.Sharif is only interested in selling their assets like Gwader and Gadani to China and other foreign countries and He is quite indifferent to their grievance. Secondly, it will de motivate people like Dr.Malik Baloch and other liberal Balochs who have opted for parliament rather than mountains to fight for their legitimate rights. Thirdly, it will add salt to the wound of families of missing people who have walked 730 km in harsh weather from Quetta to Karachi to register their protest, but our ease loving leader can’t go to Supreme Court which is only 10 minute drive from his office. (Courtesy : Bolan Voice)

The writer is the Assistant News Editor, Daily Intekhab, Quetta

Published in The Balochistan Point on February 5, 214