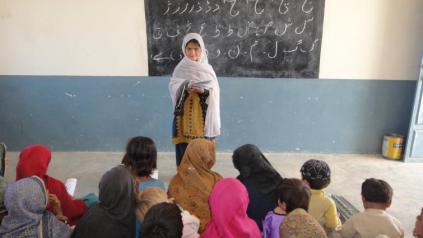 No doubt Balochistan is famous for its large territory and natural resources; however, it is backward in terms of education and advancements. Though much has been said regarding the enhancement of educational system, a little is done to deal with it. Moreover, it remains disheartening to reveal that there are 5000 schools that do not even have a building and operate in the open air mostly with a single teacher. What appears to be more disappointing is the statistics a non-governmental organization ASER revealed.

According to the annual 2013 report of ASER, in Balochistan only 34 percent governmental teachers were graduates. 81 percent children of three to five year were currently not enrolled in any childhood schooling. 71 percent schools had no drinking water, 75 percent schools lacked boundary walls and 83 percent lacked proper toilet facilities. Certain dismal infrastructures of educational institutes do not create an effective learning environment which is the need of time.

Furthermore, the Pakistan Social and Living Measurement Survey 2011-2012 puts the country’s literacy rate at a stagnant 58 percent  with Balochistan standing at 46 percent  of the literacy rate despite the fact that Balochistan covers almost 44 percent of the country’s land mass. The alarming circumstances of educational system keep the institutes of the province intellectually barren. Neither our institutes produce good thinkers and intellectuals nor good human being, but only degree holders.

Keeping the failure of government in mind the Balochistan Education Minister Jan Mohummad Buladai quotes that “Not a single PhD or a competent officer is available to review the textbooks or carry out monitoring and evaluation hence we are compelled to teach Punjab textbooks.” What can be the worse condition of education than this?

Hence it is never too late for the recovery of what is going wrong. With the objective of developing the system, the introduction of new methodology of teaching or pedagogy is the must. What makes the infrastructures stable is the provision of funds and their proper usage. The most important thing is that the appointment of teachers should be on the basis of merit. To make the education sector far from politics or politicizing is the need of time.

Truly, if there is no investment on education, not only the country will become backward, but also the nation will face the music. Nevertheless, it is education which politically, economically and culturally makes a nation strong and rich. It is high time the government stopped ignoring the education system of Balochistan.

Published in the Balochistan Point on April 2, 2014

2014-04-02
admin
Previous: The prior earthquake and the nation-wide Campaign
Next: CM Balochistan congratulates Quetta Bar body