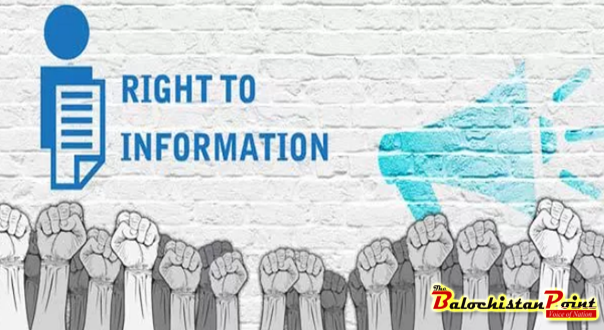 “Like provincial governments of Khyber Pakhtunkhwa, Punjab and Sindh, federal government repealed freedom of information ordinance 2002 and replaced it with a comparatively progressive Right of Access to Information Act 2017 in recent times” said Amer Ejaz.

Executive Director, CPDI said that the Government of Balochistan should now also follow suit and start legislation of an effective right to information law to bring transparency and promote public participation in government affairs.

Ejaz said “The Balochistan Freedom of Information Act 2005 is not effective and does not provide fullest possible access to the information held by public bodies. The law has many flaws like restricted access to information retained by government departments and the process of filing information request is also problematic and extensive.”

“To advocate the enactment of a progressive RTI law, CPDI has penned several letters to Chief Minister, Speaker Assembly and many other legislators of Balochistan,” Executive Director, CPDI added.

Published in The Balochistan Point on November 27, 2017