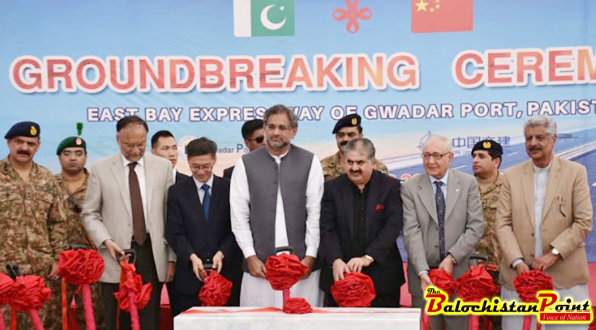 GWADAR: Prime Minister Shahid Khaqan Abbasi has said that the fifteen billion rupees project will provide a vital link from Gwadar to the Makran Coastal Highway. He said this on Wednesday whiling performing the ground breaking of Eastbay expressway in Gwadar.

He said that the expressway would be completed in the stipulated period.

The Prime Minister expressed the confidence that “The multi billion dollars CPEC will add a new dimension to the friendship between the two countries. The CPEC reflects the vision of Chinese President Xi Jinping and former Prime Minister Nawaz Sharif. He said the CPEC now enjoys support in all the provinces.” He added.

PM said that the ground-breaking of Gwadar Airport would soon be performed while water and power problems of the area will also be addressed. adding that development of Gwadar costing 170 billion rupees was on the track. “ The confidence that this will transform Gwadar from a small fishing town into a city of global importance because of its geo strategic location, he expressed.

PM asked Balochistan government to ensure that the people of the area take full benefit from the development of Gwadar Since developmental projects in Gwadar and the CPEC would help provide job opportunities to hundreds of thousands of people.

MP instructed the Governor and Chief Minister Balochistan for the interest, benefits and rehabilitation of the people in all developmental projects. “650 kilometer lengthy from Quetta to Gwadar has already been constructed which has considerably reduced the distance of days to nearly eight hours,” Added Prime Minister Shahid Khaqan Abbasi

2017-11-23
admin
Previous: Gwadar shut down to protest water crisis as PM arrives
Next: Balochistan Freedom of Information Act 2005 termed as the weakest law in Pakistan